Irish investigators have determined that an Omni Air International Boeing 767-300ER crew rejected a take-off above the V1 threshold shortly before a brake-fire incident that triggered an evacuation.

The pilots rejected the take-off at 149kt – compared with the calculated V1 of 146kt – after hearing a noise traced to an open cockpit window.

But the crew believed the aircraft had been travelling at less than 120kt during the departure from Shannon on 15 August 2019.

The 767 flight crew training manual states that the inadvertent opening of an unlatched cockpit window is “not considered” an event that warrants a high-speed aborted take-off.

“Although the resulting noise levels may interfere with crew communications, it is safer to continue the take-off and close the window after becoming airborne,” it says.

Ironically the first officer, upon hearing the noise, queried the status of the left-hand sliding cockpit window but could not be heard by the captain.

The captain remained unaware of the source of the noise and chose to reject the take-off, retarding the thrust levers and applying brakes at 152kt.

Ireland’s Air Accident Investigation Unit says the crew “underestimated” the 767’s speed at the time of the abort. Over the subsequent 28min the crew carried out several taxiing manoeuvres which would have required braking to control speed. 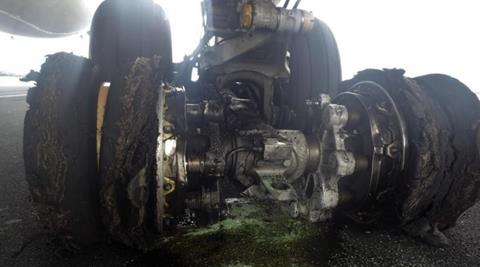 While a rejection at 120kt translated to a brake-cooling time of 44min, the higher speed required a longer cooling period.

“Had the flight crew been aware of this, they may have adopted a more cautious approach, in particular with regards to taxiing the aircraft,” the inquiry says.

As the aircraft continued to taxi back to the parking stand, travelling along runway 24, the crew was informed of smoke and fire from the left-hand main landing-gear, and the captain ordered an evacuation.

Examination of the wheels, brakes and flight-recorder data could not identify the cause of the fire, which badly damaged the forward tyres on the bogie as well as hydraulic lines.

But the inquiry believes the fire resulted from overheating of the brake system after a high-speed rejected take-off and a lengthy period of taxiing during which the brakes, particularly on the left side, were used to control the aircraft.

None of the 145 passengers and 10 crew members was seriously injured during the event. Cockpit-voice recorder information shows the pilots had carried out the ‘before start’ checklist, during which the captain responded with ”locked” to the first officer’s call on the cockpit windows.