Greek investigators have disclosed that the crew of an Airbus A320 allowed the aircraft’s airspeed to decay to the point where its automatic stall-protection system activated on approach to Muscat.

Operating for Oman’s SalamAir, the Greek-registered Orange2Fly A320 (SX-ODS) had been arriving from Dubai on 28 January 2019.

Although the first officer of the jet – which was vectoring for an ILS approach to runway 26R – had initially been flying, the captain temporarily took control at about 2,260ft as the aircraft manoeuvred to intercept the final approach path.

He disconnected the autopilot and autothrust, and selected idle thrust, at about 1,840ft. The aircraft entered a steep right turn at 1,480ft with a bank angle of nearly 38°.

The aircraft continued to descend and decelerate until, at 920ft and an airspeed of 145kt, the captain handed control back to the first officer – with the thrust levers still in the ‘idle’ setting.

But Greece’s air accident investigation and aviation safety board says the first officer testified that he “never realised” that the autothrust was disconnected, claiming there had been no call-out, and added that he had “never previously flown the aircraft” with its autothrust disengaged.

With the first officer unaware that the thrust needed to be controlled manually, the aircraft’s airspeed bled away. Just below 500ft the captain intervened with nose-down sidestick, while the first officer was applying nose-up, resulting in dual inputs until the jet reached 350ft.

The thrust remained at idle until the airspeed declined to 116kt and the aircraft, descending at 1,200ft/min, reached 290ft – at which point the aircraft’s ‘alpha floor’ stall-protection activated and take-off power was applied by the autothrust. 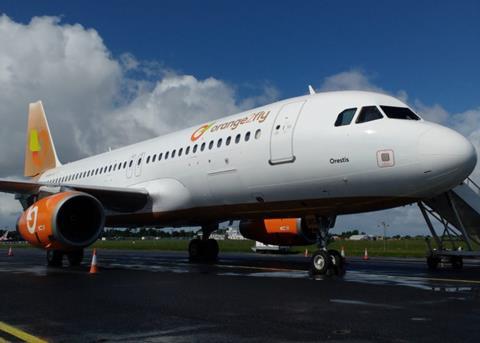 Flight-data analysis shows the aircraft reached a minimum altitude of 210ft and pitched 14.8° nose-up before it began to accelerate and climb.

The first officer’s sidestick initially registered pitch-up and the aircraft’s pitch attitude reached 16.5° before both pilots applied dual nose-down sidestick input. The aircraft levelled off and its autothrust disconnected at 134kt.

One of the senior cabin crew members testified that she had noticed the aircraft “very close to the ground” with “loud [beeping] noises” from the cockpit, after which the engines increased power and the aircraft gained height, before touching down about 30s later.

Investigators state that the A320, with the captain flying, crossed the runway threshold at 70ft and landed without further incident. None of those on board was injured.

But the inquiry points out that Greek investigators were not initially notified of the seriousness of the event.

The investigation board received an occurrence report from the carrier on 6 February 2019 – nine days after the event – which “did not contain any evidence” of a serious incident.

Only after the board received an internal investigation report from the carrier on 28 March did it upgrade the classification of the event, but an inquiry was delayed by communication issues with Oman and the decision by Omani authorities – relayed to Greek counterparts at the end of May – not to investigate owing a lack of sufficient information.

Greek investigators notified relevant parties of its investigation in November 2019.

Investigators’ findings, published in August 2021, state that the cockpit-voice recorder had been erased before the inquiry could obtain information on the pilots’ discussions, but describe cockpit-resource management during the incident as “poor”.

There was non-compliance with standard operating procedures during “all phases” of the initial and final approach, the inquiry says, including handover control, bank angles, vertical speed, and glideslope deviation.

Pilots did not read out and confirm mode changes, and the handover from the captain to the first officer took place below 1,000ft without the aircraft being fully stabilised, its thrust at idle.