UK investigators have found that a Boeing 737-400 freighter experienced a series of sink rate deviations after its crew declared a stable approach to Exeter airport, eventually resulting in a damaging hard landing that wrote off the aircraft.

The West Atlantic aircraft (G-JMCY) was conducting an ILS approach to runway 26, after arriving from East Midlands at night on 19 January last year.

While both pilots were familiar with the steeper 3.5° glideslope, and remarked on it during a short approach briefing, they did not mention that the stabilised approach criteria differed from a 3° glideslope. The rate of descent limit, for example, can be increased from 1,000ft/min to 1,150ft/min.

After establishing visual contact with the runway at 1,000ft the first officer, who was flying, disengaged the autopilot and autothrottle.

The crew declared the approach stable at 500ft, with a descent rate of 860ft/min and the aircraft slightly above the glideslope. 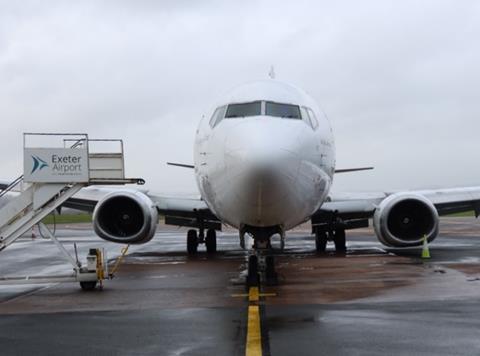 But the descent rate – which was already “close to the limit”, says the Air Accidents Investigation Branch – was increasing, and soon exceeded the 1,150ft/min maximum.

It was reduced to 300ft/min but subsequently rose to 1,700ft/min, with the jet deviating below the glideslope for 8s at 320ft, triggering a ‘sink rate’ alert.

The captain did not sense a need to take control, because the first officer started correcting, but two further ‘sink rate’ warnings were issued over the excessive descent rate, which reached 1,300ft/min at 150ft and nearly 1,700ft/min at just 25ft. Investigators state that the aircraft would normally have instructed ‘pull up’ as well, but it had already touched down before the order could be given.

Analysis of the approach showed the aircraft’s pitch varied between 5° nose-up and 6° nose-down during the final 500ft.

“While it is not unusual for changes to be made to the aircraft’s attitude to remain on a glideslope, such significant variations suggest there was either an element of over-controlling or too great an adjustment to correct a deviation,” says the inquiry.

It adds that this probably led to the deviations below the glideslope, the high rates of descent, and the eventual hard landing.

Flight-data recorder information shows the aircraft, which was subject to wind fluctuations, did not stall. The landing impact was recorded at 3.8g but the inquiry says the sample rate and location of sensors were “not ideally placed” to determine peak forces. More detailed modelling indicated a descent rate of 24ft/s – equating to 1,440ft/min – at touchdown.

Small pieces of debris, including composite material and broken fasteners, were left on the runway and there was evidence of hydraulic oil leaks as the aircraft vacated. The 737’s fuselage, aft of the wings, was distorted downwards, cracked and buckled, and the crown skin was creased along most of the aircraft’ length. 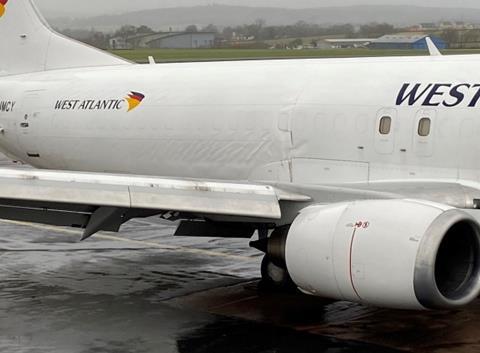 Both main landing-gear shock absorbers were found to have bottomed, and the left gear was distorted upwards to the point that the aircraft was listing 2° to the left. The engines had not contacted the runway, but structures including flap-drive mechanisms were damaged.

Boeing’s original crashworthiness evaluation of the passenger 737-400 assessed that the wing box would remain intact during a touchdown at the maximum weight of 54.9t (121,000lb) and a sink rate of 18ft/s.

The Exeter accident involved a landing at 52.9t and a sink rate of 24ft/s, but the wing box stayed intact, preventing fuel leakage.

While the left main landing-gear beam on the aircraft was visibly distorted upwards, it also remained intact, as did the drag strut bolts, and Boeing concluded the landing did not reach the vertical or drag load limits.

The inquiry says the captain kept the possibility of a go-around in mind, but had confidence in the first officer’s abilities, having flown with her on several occasions.

“It is possible this may have led to him to feel that the [first officer] was able to handle the situation and so did not call a go-around or take control,” it states.

West Atlantic has since instructed crews that only the captain shall conduct landings at Exeter, and has highlighted the requirement for an immediate go-around if an approach becomes unstable.

It has also acknowledged that it had “no robust mechanism” to monitor trends in pilot performance over recurrent checks, making persistent underperformance more difficult to identify. The carrier has introduced new procedures to rectify this situation.