Ukrainian investigators believe crew fatigue led to an Antonov An-12BK cargo transport’s descending below the glidepath in dense fog on approach to Lviv, and colliding with trees substantially short of the threshold for runway 31.

But the inquiry into the fatal accident, on 4 October 2019, also estimates that the Ukraine Air Alliance aircraft departed Spain’s Vigo airport with a take-off weight of 66.4t – about 5.4t above the maximum permitted figure of 61t.

Absence of documentation including weight calculations and the logbook meant the inquiry “could not accurately establish” the An-12’s take-off weight and centre-of-gravity, says investigation authority NBAAI.

It says a separate analysis suggests the aircraft might have been as much as 6.5t over its maximum limit.

This excessive take-off weight meant the An-12 increased its fuel consumption and did not have sufficient fuel to carry out a diversion to the alternate Kiev Borispol airport.

Investigators believe the aircraft (UR-CAH) had around 650kg of fuel remaining as it carried out the approach to Lviv. But as the ‘final reserve’ fuel signal is not captured by the flight recorder, the inquiry says an accurate determination of remaining fuel is “impossible”.

Fuel was found only in the aircraft’s wing root tanks. Several other fuel tanks had been destroyed in the crash. 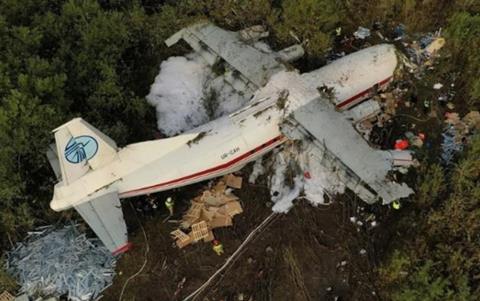 After descending below the glidepath the aircraft crashed 1.3km short of the runway

NBAAI found that, on the day before the accident, the crew “did not comply” with working hours and rest time between flights – and that such breaches could not be detected by the operator’s oversight procedures.

According to investigators the crew had arrived in Toulouse from Toronto on 3 October, and rested before flying a 2h service from Toulouse to Vigo, but did not leave Vigo airport in the 4h before the delayed overnight departure to Lviv.

The inquiry states that, as the aircraft neared Lviv, it was established on the localiser for runway 31. The crew was informed of the low-visibility conditions at the airport.

While 11.3km from the threshold the aircraft was 70m above the glidepath and, in order to align, the captain increased the aircraft’s descent rate to about 1,100ft/min.

But when the An-12 was cleared to land, at a distance of 7.6km, it had dipped 11m below the glidepath. This deviation increased until the aircraft – still 3km from the runway – was flying at a height of just 105m, and descending.

An alarm sounded as the aircraft reached the 60m decision height, to which “none of the crew members responded”, says the inquiry. 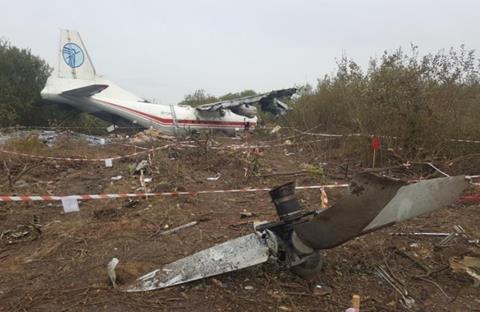 The aircraft struck trees 1,348m from the threshold and contacted the ground, coming to rest after travelling about 230m.

Only three of the eight occupants survived the crash, suffering serious injuries. The inquiry says the “probable excessive physical fatigue” of the crew, during the approach in dense fog, led to the “unconscious descent” of the aircraft below the glidepath.