Dutch investigators have determined that a Piper PA-18 formation display team was practising a new, but inherently hazardous, manoeuvre with insufficient risk mitigation before the two aircraft fatally collided.

The accident occurred at Oudemolen, some 25km south of Rotterdam, on 21 June 2019 as the pilots rehearsed a familiar display routine, but with the addition of the new manoeuvre.

This addition involved flying the two aircraft line-abreast, then splitting away in opposite 360° orbits at 50° bank – which took about 25s to complete – and rejoining line-abreast, although the wingman would be slightly aft and close in on the leader from behind.

While the manoeuvre had previously been practised three times, the pilots recognised that keeping one another’s aircraft adequately in sight during the rejoin was “difficult”, says the Dutch Safety Board.

The trailing wingman, in particular, could lose track of the lead aircraft and, during one of the practice runs, the wingman had to break out of the formation to avert a collision. 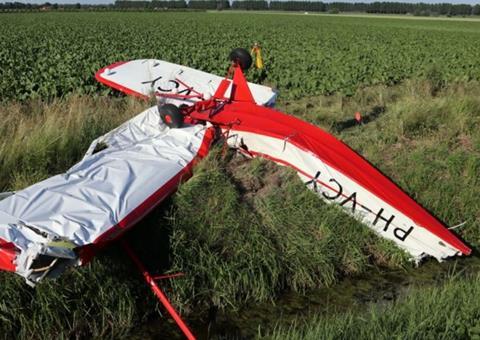 Wreckage of the wingman PA-18, missing its tail section which was sheared off in the collision

To reduce the risk of collision the pilots introduced a 100ft vertical separation to provide margin in case the wingman could not maintain visual contact.

But the inquiry says such a margin “does not assure separation at all times” because of altimeter tolerances and pilots’ unintentional deviations during an exercise – which, it adds, are “unavoidable”.

The pilots had decided that the practice exercise, on the day of the accident, would determine whether the manoeuvre was safe, or whether it should be discontinued.

Analysis of the accident showed that the leader had rolled out of the orbit and was flying wings-level at 500ft when the wingman approached from behind on the right – in a slight right bank and a little higher than the leader – with a higher airspeed. 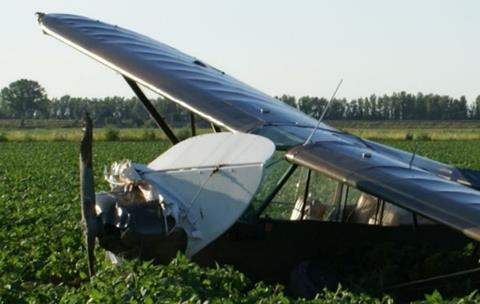 As a result the wingman’s PA-18 (PH-VCY) became uncontrollable, entered a spiral descent and crashed on an embankment. Neither its pilot nor the passenger survived.

The other PA-18, however, was able to carry out an emergency landing in a field despite the pilot’s view being obscured by a section of the wingman’s tail structure which was jammed on the nose. Although the aircraft (PH-RED) was substantially damaged, the pilot only suffered minor injuries and the passenger was unharmed.

Both pilots had valid display authorisations and had gained proficiency in developing and performing their formation display since 2016. But the mitigation of a 100ft separation was “not effective” to ensure safety, the inquiry says, and the manoeuvre was “by its design, unsafe to perform”.