Two pilots of the Pakistan International Airlines ATR 42-500 which crashed near Havelian four years ago were among cockpit crew initially suspected of holding dubious licences, but accident investigators have concluded their qualifications were valid.

“This rendered a suspicion about licenses of few of the pilots who appeared in the exams during a specified period of time,” says the Pakistani aircraft accident investigation board. “Their attendance [or] physical participation could not be verified from the records.”

Three pilots – a captain and two first officers – were in the cockpit of the PIA ATR at the time of the fatal Havelian accident on 7 December 2016.

One of the first officers, occupying the right-hand seat, was undergoing route training while the other, already qualified, was in the jump seat.

The inquiry says the captain’s and the jump-seat first officer’s names appeared on the initial list of pilots whose licences were considered suspicious.

As part of its licensing scrutiny the civil aviation authority has sought clarification from individuals, and reconciled a number of cases – and the inquiry states that the authority “removed” the names of the two pilots from the list, on the basis that standards were followed.

“All three pilots held valid licences, and medical fitness,” the investigators add. “They fulfilled the desired qualification criteria, and met the related formal prerequisites…which were required for the event flight.” 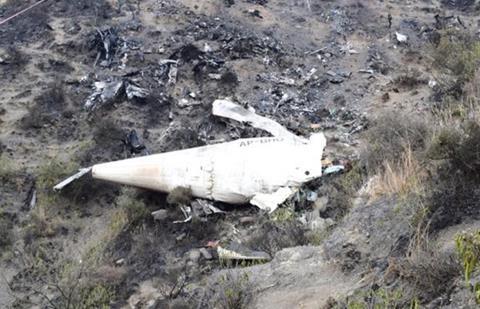 Investigators found that a complex left-hand engine failure resulted in a loss of power, variations in propeller speed, and high drag on the left side of the aircraft. The crew lost control of the ATR, which stalled, lost altitude, and collided with high terrain. None of the 47 occupants survived.

French investigation authority BEA compiled an analysis of the crew’s actions. Observations before the onset of the emergency indicated the crew was “not well organised” and managing the ATR’s energy state was a “low priority”.

Shortly after signs of an engine problem emerged, the two first officers swapped seats – the trainee shifting to the jump seat – in accordance with the airline’s standard procedures for abnormal situations, and the captain took over as the flying pilot. The captain also called for an engineer, travelling as a passenger, to enter the cockpit.

But as the situation deteriorated, cockpit conversation became “confused and unstructured” and the captain became disorganised. The analysis highlights “incorrect” actions – including the reduction and increase of power, in response to the asymmetric condition, which caused the airspeed to decline – and the absence of discussion of abnormal parameters.

The aircraft’s behaviour was “beyond any possible imagination of the crew”, the inquiry says, adding: “The pilots had no clue as to what was happening to the aircraft. They had never experienced or simulated such [a] situation.”

While the crew’s actions indicated “several events of incorrect prioritisation”, the inquiry concedes that the incident was “unexpected” and that the pilots were “not trained” to handle the specific sequence of occurrences.

“Based on the analysis of actual crew performance in comparison with the expected crew actions, [we have] concluded that their performance was commensurate with their respective experience,” says the inquiry.

“The matter of dubious licenses surfaced during the course of investigation therefore becomes irrelevant.”

But the inquiry nevertheless contains a number of remarks about the pilots’ training records.

The trainee first officer, who had initially been flying the aircraft before the seat-swap, had made “meagre” career progression while training records had reflected “frequent observations related to poor [or] slow progress, and unacceptable performance”.

“However, he remained on the job and after necessary review he was being considered acceptable as per the minimum acceptable standards of PIA and [the civil aviation authority],” says the inquiry.

While he was assigned to Airbus A310 first officer training, he was “unable to cope” with requirements and “sent back” to ATRs, being restricted to the first officer position, it adds.

The other first officer, who took over the right-hand seat during the emergency, had accumulated far less flight time but the inquiry says his career performance had been “good and progressive”, passing and clearing the required checks.

Observations of the captain’s performance, the inquiry says, were “generally diverse” but had included remarks on “grey areas” regarding unassertiveness, adherence to standard procedures, and decision-making – although it points out that he had also passed the necessary proficiency and line checks.