Pilots of a Peruvian Boeing 737-300 should have considered a go-around instead of proceeding with a landing in heavy rain and a crosswind at Iquitos where the jet experienced a runway excursion.

The aircraft – with 121 passengers and seven crew members – had been cleared for an ILS approach to runway 06 after arriving from Lima on 10 February 2016.

Convective weather was in the vicinity, and the runway was wet, with a gusting crosswind from the right says the commission for aviation accident investigation. 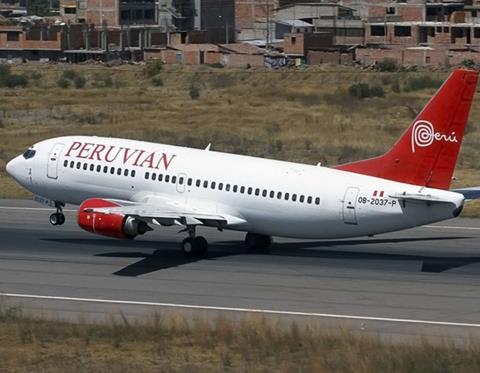 Flight-data recorder information shows the aircraft was crabbed against the wind during the approach, but nevertheless touched down 22.5m to the left of the centreline and 358m from the threshold.

Its nose was 5° to the left of the axis and when the aircraft derotated it “immediately” suffered a left-side runway excursion at 472m, travelling on muddy and stony ground for over 500m before returning to the runway surface at 60kt.

Thrust reversers were not used, the commission says, probably because the right-hand reverser had been de-activated.

Examination of the jet (OB-2037-P) showed it had sustained contamination and damage from mud and rocks to its main landing-gear, engine blades, and fuselage. 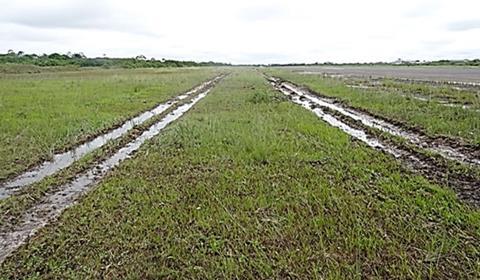 “Presence of a storm system over the airport increased the operational load of the crew significantly,” says the commission, and affected the stability of the approach.

Winds of up to 20kt persisted during the descent but initially did not cause the aircraft to deviate because the autopilot corrected the drift tendency, and this correction was maintained manually after the autopilot was disconnected at 400ft. Boeing indicated to the commission that the final deviation occurred below 50ft.

The storm reduced visibility and, as the crosswind tended to push the aircraft to the left, the crew lost spatial orientation with respect to the runway axis because it did not have centreline lights. Despite the situation the crew did not execute a go-around.

None of the occupants of the twinjet was injured and disembarked the aircraft normally after it parked in a designated area.