PIA A320 crew lowered, then raised, undercarriage before gear-up touchdown

Investigators have revealed that the crew of a crashed Pakistan International Airlines Airbus A320 did attempt to lower the landing-gear during their first approach to Karachi, but raised the gear lever again during the descent.

The Civil Aviation Authority of Pakistan confirms that the A320 touched down on Karachi’s runway 25L with its undercarriage raised, causing the jet to slide along the ground on its engine nacelles, before climbing away. 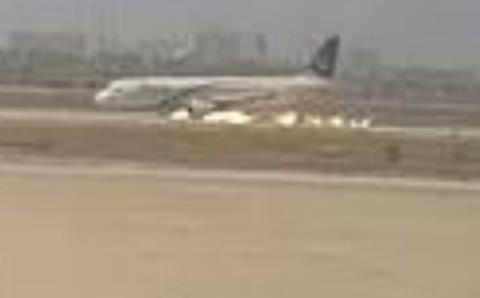 Its preliminary findings catalogue a badly-managed approach, during which the A320 – arriving from Lahore on 22 May – had been cleared to descend to 3,000ft by the time it reached the MAKLI waypoint, about 16nm from the runway.

But the aircraft remained far too high, crossing MAKLI at nearly 9,800ft and travelling at 245kt.

The crew opted to lose the excess height by selecting ‘open descent’ mode, which reduces engine thrust to idle and the autopilot uses pitch to prioritise a target airspeed.

But both autopilots were disengaged and the aircraft’s speedbrakes were deployed.

The approach controller advised the aircraft to carry out an orbit, to give the crew time to lose height, but no such orbit was carried out.

As the aircraft descended through 7,221ft – about 10.5nm from the runway – the flight-data recorder registered that the landing-gear lever was selected ‘down’.

While the A320 has a safety valve preventing the landing-gear being lowered above 260kt, flight-recorder information suggests the aircraft was travelling at about 250kt at this point.

But the inquiry has not specified whether the crew confirmed the gear was deployed, nor has it disclosed the gear indications shown by the aircraft instruments.

The controller “repeatedly” advised the crew to discontinue the approach and warned about the excessive height, but the aircraft continued with its attempts to intercept the localiser and glideslope.

As the jet descended through 1,740ft, about 5nm from touchdown, the flight-data recorder showed the aircraft’s landing-gear lever was selected ‘up’, raising the undercarriage, and the speedbrakes retracted.

The reasons for this ‘gear up’ selection have not been determined. But cockpit-voice recordings reveal warnings that the landing-gear was not down were “disregarded”, says the inquiry, along with ground-proximity and overspeed alerts.

Instead of handing the flight to Karachi airport controllers, the approach controller sought landing clearance from the airport. This was granted, without the controllers noticing the retracted landing-gear.

Flight-data recorder information shows that, as the jet passed 500ft, it was still travelling at high speed – some 220kt – and descending at 2,000ft/min.

“The landing was undertaken with landing-gears retracted,” says the inquiry. “The aircraft touched the runway surface on its engines. 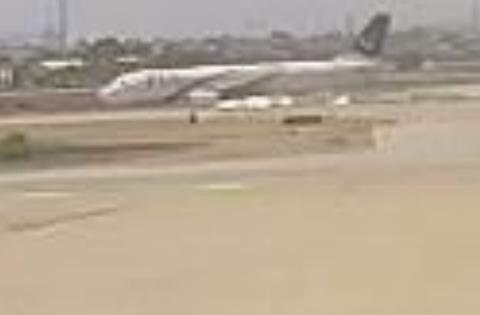 As the crew executed a go-around, the landing-gear was belatedly activated

According to the inquiry, the pilots initially applied reverse-thrust and braking, as the powerplants scraped along the runway.

But the CFM International CFM56 engine control unit uses weight-on-wheels switch logic to check the aircraft’s wheels are deployed, and in contact with the ground, before allowing the thrust reversers to activate.

The crew executed a go-around and the flight-data recorder captured a belated activation of the landing-gear lever to ‘down’, before it was immediately moved to ‘up’.

While the A320 initially climbed away, with its crew planning to make another approach to 25L, the engines “failed one by one”, says the inquiry. The ram-air turbine was deployed to provide power to essential systems, but the aircraft was unable to maintain height and the crew declared an emergency.

Although the flight-data recorder stopped functioning, the inquiry determined that the aircraft descended with its landing-gear extended and that the free-fall gear-extension method had not been used.

“[The] landing-gear in extended position did not demonstrate any malfunction of the landing-gear system,” it states.

The aircraft came down in a built-up area about 1,340m from the runway 25L threshold. It was travelling at less than 150kt with a nose-high attitude, with the horizontal stabiliser positioned 2.8° nose-up. Flaps were found to be fully retracted.

Investigators have discovered evidence pointing to the reason for failure of the right-hand CFM56 engine, but are continuing to probe the left-hand powerplant. Both showed indications of external fire, and both fans showed signs of being at low rotational speed at the time of impact.