Pilot error behind Air Canada A320 near-miss at San Francisco

The flight crew's lack of awareness of a runway closure at San Francisco was the probable cause behind a near-miss involving an Air Canada Airbus A320 that almost landed on a taxiway on 7 July 2017, says the US National Transportation Safety Board (NTSB).

The flight crew also failed to manually tune the instrument landing system frequency while on approach, and both pilots reported feeling fatigued - factors that contributed to the incident, said NTSB investigators in a board meeting today as they reached the final stages of the investigation into the incident.

The Air Canada A320, registered C-FKCK, executed a go-around when the crew realised it was aligned with the taxiway instead of runway 28R. At that time, four other aircraft were on taxiway C preparing to take off, and the A320 overflew them. NTSB investigators have noted that the A320 was at one point between "10 and 20 feet" away from another aircraft.

"I do not want to sensationalise it, but this was a very close call," says NTSB chairman Robert Sumwalt during the board meeting. No one was injured in the incident involving flight AC759, and there was no damage to the A320 which had carried 135 passengers and five crew members. 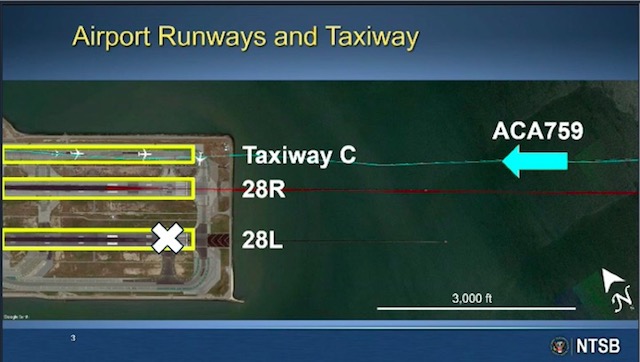 Runway 28L, which was parallel to runway 28R, was closed during the time of the incident. While this was noted in the NOTAMs that were reviewed by the crew before the flight, it appears that the pilots were not aware of the closure and ended up mistaking the taxiway for runway 28R.

NTSB human performance investigator Sathya Silva points out that information on the runway closure was buried in the pages of NOTAMs, and that the presentation was "not effective".

Sumwalt was harsh in his criticism of NOTAMs, saying that pilots often have to sift through dozens of pages of sometimes-irrelevant information. "The NOTAM system is really messed up," he says. "It's written in a language that only a computer programmer could understand… just a bunch of garbage that nobody pays attention to."

The Air Canada crew was required to manually tune the ILS frequency while conducting a flight management system (FMS) visual approach to runway 28R, but the first officer did not do so and the captain did not verify this was completed, say NTSB investigators.

The first officer subsequently told investigators he "must have missed" tuning the frequency, but could not explain why, says NTSB air safety investigator Shawn Etcher. As a result, the crew was unable to take advantage of the ILS frequency to ensure that the aircraft was properly aligned with the runway, he adds.

While the need to tune the frequency was included in the approach chart, it was not conspicuous, say investigators.

Contributing to the incident was pilot fatigue, notes Silva. The captain of the flight had gone for 19h without significant rest, and the first officer 12h. At the time of the incident (23:56 Pacific daylight time), the crew's body clock was at 03:00 Eastern Time - the time zone in Toronto, where the flight had taken off from.

Under US pilot fatigue rules, the captain of the flight would not have been allowed to operate the flight, says Silva.

Canadian regulators had previously proposed changing its pilot rest rules, to bring them more in line with US and international standards. Those rules have yet to be finalised. The NTSB says it is recommending to Canadian regulators to consider rules to combat fatigue in pilots operating overnight flights.

Transport Canada says it plans to finalise its proposed pilot duty rules later this year, and that it is reviewing the NTSB's findings and recommendations. "Transport Canada shares the National Transportation Safety Board’s goal of improving aviation safety and we take their recommendations seriously," says the Canadian agency.

The NTSB issued six recommendations for the US Federal Aviation Administration. These include the need to identify approaches that require an unusual manual frequency input, and to make such information more noticeable on approach charts.

In addition, the agency calls for a group of experts to be established, to review NOTAMs and to create guidance on how to prioritise and present relevant information for flight operations.

The NTSB suggested establishing requirements for aircraft landing at airports in class B and C airports to have equipment that alerts pilots when the aircraft is not aligned with a runway surface. The FAA was also called on to work with manufacturers to develop technology for an aircraft system to issue such alerts.

At airports, the NTSB suggested modifying equipment to provide alerts on potential collision risks and for more research to be conducted to determine how to make closed runways more conspicuous.

While NTSB investigators say the lighting at San Francisco met all standards at the time of the incident, a number of visual cues had supported the crew's expectation bias that taxiway C was actually runway 28R. These include construction lighting on runway 28L that looked similar to ramp lighting, notes Silva.

In a report to the NTSB, Air Canada says it has taken several actions since the incident. These include simplifying its approach charts for San Francisco, including San Francisco-specific training in aircraft simulators and launching training aimed at reducing expectation bias among operations staff. The Star Alliance carrier has also chosen to retrofit new aircraft like the Boeing 737 Max and Airbus A220 with dual heads-up displays to enhance situational awareness for crewmembers during high-risk and low-visibility approaches.

An Air Canada spokesman says in a statement to FlightGlobal that the airline will review the NTSB's final report on the incident once it is issued.

"Based on internal reviews and work with US and Canadian Authorities, Air Canada has implemented measures to refine its training and procedures, and it has acquired new technology to further advance safety," he adds.