North American airline pilot association ALPA International is expressing concern that there is no formal process to warn commercial crews of the increasing risks posed by space debris re-entering the atmosphere.

It has issued its own caution over the uncontrolled re-entry of a large booster stage of the Chinese Long March 5B launch vehicle carrying part of the Tianhe space station.

The launch took place on 29 April but the precise time and location of the booster re-entry is unknown.

US-based non-profit organisation Aerospace Corporation, which specialises in space-related research support, estimates the re-entry at 02:34UTC on 9 May – but this is still subject to a 21h window in each direction. 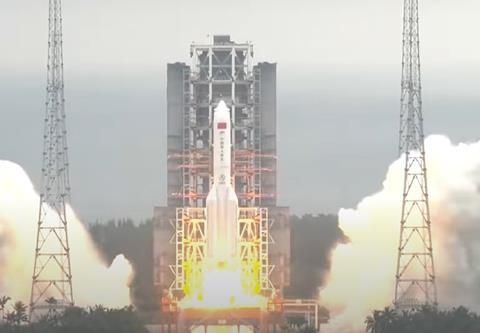 The pilot association points out that the Long March 5B booster, at 21t empty, is seven times more massive than a SpaceX Falcon 9 rocket section which experienced uncontrolled re-entry in late March – during which several parts including pressure tanks survived and struck the ground.

“Despite this hazard to people, structures, and aircraft, no US government agency is responsible for providing notification to the public,” it states.

“There does not appear to be any process to notify pilots – for example, via NOTAM – of the debris hazard using the most updated information.”

It is advising commercial pilots to check the latest data from Aerospace Corporation, as the estimates for the time and location of the booster’s re-entry are refined. International cockpit association IFALPA has reinforced the warning through a safety bulletin to crews.

Operations in Canada will not be at risk, says ALPA, given the latitude range of the re-entry. It adds that debris might be easier to see at night, appearing similar to a group of meteor trails.