Investigators believe a SriLankan Airlines Airbus A330-300 lost considerable altitude during an in-flight upset after one of the pilots nudged the sidestick during cruise, disconnecting the autopilot and pushing the jet into a descent.

While the inquiry does not specify the reason for the “sharp nose-down input” by the first officer, who was flying, it refers to his being served a meal, but not handing control of the aircraft to the other pilot – a cruise pilot in the left-hand seat who was standing in for the resting captain.

The aircraft had been cruising at 39,000ft over the Indian Ocean, west of Jakarta, during a service from Colombo to Sydney on 21 March last year.

The incident occurred a few minutes after the changeover.

The twinjet transitioned from 2.8° nose-up pitch to 1.1° nose-down and began to descend.

It was operating in reduced vertical separation minima airspace, where adjacent aircraft cruising altitudes are separated by just 1,000ft.

The cruise pilot, despite not designated as the flying pilot, responded by engaging his autopilot, but without specifying that he was taking control. The first officer continued to make overriding sidestick inputs, which caused the autopilot again to disconnect.

Investigators add that the cruise pilot was “transfixed” by the changes in airspeed and “did not observe” either the vertical speed or the loss of altitude. 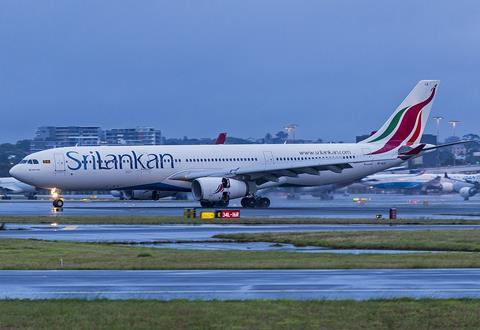 Pictured here at Sydney, this SriLankan A330 (4R-ALR) was the jet involved in the incident

The aircraft’s pitch reached 5.3° nose down and it descended at a rate of up to 5,700ft/min, losing 1,540ft before the first officer’s sidestick was released, and the cruise pilot’s sidestick registered a nose-up input. The autopilot was subsequently re-engaged and the aircraft recovered, some 2min after the initial upset, climbing back to its assigned altitude.

Neither pilot had followed specific procedures for handing over, or taking over, the aircraft’s controls, says the inquiry.

“The cruise pilot and first officer as operating flightcrew had not displayed the expected level of competency,” it adds. “There was poor crew co-ordination during the incident.”

Although the cruise pilot advised Jakarta air traffic control about the altitude deviation, the pilots did not fully brief the captain when he returned to the cockpit. The cruise pilot did not involve the first officer in the discussion, briefed the captain in Sinhalese – not an accepted aviation language – and did not mention the exact extent of the altitude loss.

The seriousness of the incident was only discovered when it was detected during routine flight-data monitoring.

Mandatory occurrence reports were submitted on 2 April, nearly two weeks after the event, and all three crew members were immediately grounded pending an investigation into the circumstances.

Both the flight-data and cockpit-voice recorders had already been overwritten by this point, and the inquiry had to rely on digital access recorder information.

None of the occupants – just nine passengers, and seven crew members – was injured, and the aircraft (4R-ALR) was undamaged.

Investigators have recommended improved training in upset recovery and awareness of incident-reporting criteria, especially for altitude loss in RVSM airspace. SriLankan Airlines, the inquiry adds, should introduce procedures for handing over aircraft control when meals are served.