UK investigators are examining whether lack of line flying, as a consequence of the pandemic, is directly linked to a serious go-around incident involving a TUI Airways Boeing 737-800 at Aberdeen.

Neither pilot had flown for significant periods during the 18 months prior to the 11 September incident, and the Air Accidents Investigation Branch has highlighted the difficulty in using simulators as a substitute for the real-world pressures and workload of line flying.

“Although the investigation has not established a link between this incident and a lack of recent line flying, it is clearly a possibility,” it states in a special bulletin.

The aircraft (G-FDZF) had been operating from Palma de Mallorca to Aberdeen, and was preparing for a Cat I ILS approach to runway 34.

Owing to the presence of a search-and-rescue helicopter, which was being given priority, the 737 pilots were warned they might have to discontinue the approach.

This break-off instruction was confirmed at 2,600ft and the crew was told to climb to 3,000ft and turn left onto a heading of 270°. With the activation of go-around thrust, the single active autopilot disengaged. 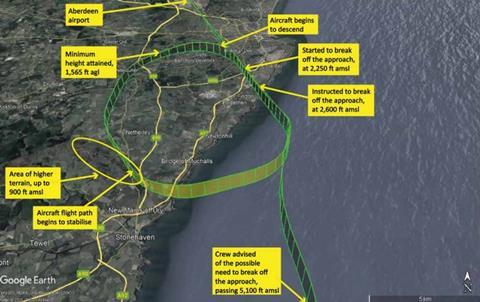 Notable events during the 737’s aborted approach to Aberdeen

The aircraft began to climb from 2,250ft some 18s later and started its left turn. But before it reached 3,000ft it began to descend before the flight director had transitioned from ‘altitude acquisition’ to ‘altitude hold’ mode.

Air traffic control gave the crew additional heading instructions as the aircraft continued to descend, reaching a minimum of 1,780ft – equating to 1,565ft above ground – before starting to climb again, just as controllers called the pilots to reiterate the assigned altitude of 3,000ft.

The descent lasted almost a minute, and the inquiry found the aircraft also accelerated to 286kt, far above the crew’s selected speed of 200kt.

As the aircraft reached 3,000ft the crew re-engaged the autopilot and the jet’s flightpath stabilised. It was vectored for another approach to runway 34 and landed without further incident. None of the 73 occupants was injured.

The special bulletin aims to highlight that go-arounds from intermediate altitudes on approach can “provoke errors” because they are “not practised frequently”.

It stresses that both pilots had faced long stretches without flying over the previous 18 months, as the pandemic forced airlines to slash operations and ground aircraft.

Both pilots had undergone numerous simulator sessions over this period in order to retain currency. But the inquiry says the captain had flown only 10 flights in the month prior to the incident while the first officer was operating only his fourth flight in almost 11 months, having completed two flights with a trainer seven days earlier.

Airlines have faced “significant challenges”, the inquiry acknowledges, in trying to keep pilots current. It points out that there are legal requirements for pilots to carry out three take-offs and landings within 90 days, but no requirement for them to have actually operated the aircraft on commercial flights.

“Simulators have been used not just for the take-off and landing requirements but also to try and maintain crew skill levels when operating in both normal and emergency situations,” it says. “The challenge has been, and is, to try and represent the real world of flying in a simulated environment.”

Although simulators are able to replicate the aircraft operation, recreating situations of high workload arising from the combination of air traffic control instructions and background communications, other aircraft, weather and other pressures is difficult.

Investigators are continuing to assess the various potential contributors to the incident, work that includes efforts to determine the impact of reduced flying on the crew.