US safety authorities have cautioned Boeing 777 and 787 operators over a potential mode confusion during take-off which can result in the aircraft departing with the wrong pitch-control guidance.

Incidents have been recorded in which the ‘altitude hold’ mode of the autopilot flight-director system had been erroneously engaged before take-off.

While the US FAA has not identified the specific operators involved, it says the result, in one case, was an unusually low initial climb rate while another instance triggered ‘don’t sink’ alerts from the aircraft’s ground-proximity warning system.

Analysis of the incidents, it says, found that the wrong pitch mode had been activated “without the crew’s recognition” before departure.

Once airborne, the crews pressed the take-off/go-around switch to restore proper pitch guidance. 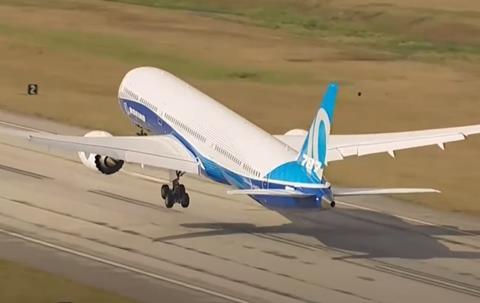 The FAA says the default roll and pitch mode, when the flight director is initially turned on, is ‘take-off/go-around’.

But this pitch mode can accidentally be switched to ‘altitude hold’ in several ways, on both the 777 and 787.

These include inadvertently selecting the altitude hold switch on the mode control panel, or selecting the ‘flight level change’ or ‘vertical speed’ switches when the selected altitude is within 20ft of the barometric altitude.

The FAA has also highlighted other particular combinations of actions, unique to each aircraft type, which can cause the transition – during re-alignment of air data inertial reference systems on the 777, for example.

If the aircraft is in ‘altitude hold’ mode on the ground, pressing the take-off/go-around switch will have no effect on the pitch mode or guidance.

Should the aircraft depart in this mode, and the selected altitude on the mode control panel is close to the displayed barometric altitude, the flight director will issue nose-down pitch guidance just after becoming airborne.

“While ‘altitude hold’ latching and ‘take-off/go-around’ behaviours are described in the Boeing flight crew operations manual, this specific scenario is not explicitly described,” says the FAA in a special airworthiness bulletin.

“It is apparent that this specific system behaviour may not be known to all pilots of these aircraft.”

Boeing issued an operator message on 4 March in reference to the matter, including procedures to restore the correct ‘take-off/go-around’ mode while on the ground.

The FAA says operators of the twinjet models should notify crews of the issue and incorporate actions outlined at the earliest opportunity”. It adds that crew should maintain situational awareness to ensure the aircraft is operating in the correct mode for any specific phase of flight.

Analysis is underway to assess the ‘altitude hold’ and ‘take-off/go-around’ logic in other Boeing aircraft, including the 757, 767, 747-400 and 747-8. The FAA says no similar events have been recorded on these types to date.