UK investigators examining the disappearance of a Piper PA-28 light aircraft over the English Channel have disclosed that its pilots were flying through cloud, despite neither being qualified for instrument conditions, when contact was lost.

The single-engined PA-28 was one of a group of seven aircraft undertaking a Channel crossing from the UK’s Wellsbourne airfield to Le Touquet in France, as part of a flying club event on 2 April.

Both its pilots held private licences and had completed complex aircraft training required to fly the PA-28, and had previously participated in similar club excursions, but neither held an instrument rating or qualification.

According to the UK Air Accidents Investigation Branch the route was planned for 5,000ft and a flight time of around 1h 38min. 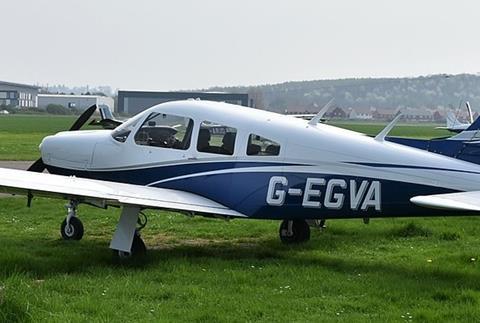 Piper PA-28 G-EGVA, the aircraft lost in the accident over the Channel

Each pilot of the seven aircraft taking part in the event completed their own planning, and weather assessment, with no joint pre-flight co-ordination. While one aircraft performed its flight under instrument rules, the other six – including the PA-28 – would fly under visual rules.

The PA-28 was the second of these six to depart but, being faster, it overtook the lead aircraft before reaching the UK coast.

Video uploaded by the right-hand pilot during the flight showed the aircraft apparently proceeding normally at 5,000ft but with cumulus cloud ahead in the distance.

UK meteorological data identified heavy precipitation in the Channel from a highly-active convective area, and there was evidence of waterspouts descending from the cloud as well as cloud stretching down to the water surface.

Radar information shows the aircraft started descending to around 3,000ft and then climbed above 7,000ft. The aircraft could not climb higher owing to controlled airspace above.

“It is not possible to know the pilots’ intentions but these changes in altitude might have been an attempt to avoid cloud,” says the inquiry.

After reaching 7,000ft radio transmissions from the aircraft confirmed it was in cloud.

“Neither occupant was qualified to fly in cloud,” the inquiry adds. “It is not known if they entered cloud inadvertently.” 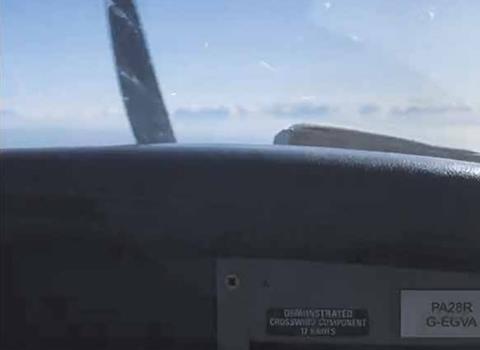 Investigators point out that entering cloud when not suitably qualified is “very dangerous” and, given the clear signs of cloud in the video, there should have been “sufficient time” to turn around if the aircraft was unable to evade it.

“It is possible that the occupants’ previous experience of flying through cloud without incident encouraged them to try to fly through it on this occasion,” says the inquiry.

While some debris washed up on the French coast – indicating the airframe was subjected to “considerable forces and substantial disruption” – neither the aircraft nor its pilots have been located. Both were wearing lifejackets.

According to logbooks and club records the left-hand pilot had 200h, and had flown two previous flights this year and four in 2021. The right-hand pilot had 167h and had also flown two flights earlier in the year.