Nigerian investigators have disclosed that an engine pod-strike involving a Max Air Boeing 747-400 resulted in the powerplant’s shedding its cowls as it rolled out after landing at Minna.

The country’s Accident Investigation Bureau says the captain, who was flying, had remarked that the ILS signal was “erratic” on both the glideslope and the localiser as the aircraft descended through 2,000ft.

At this point, it states, the autopilot was disengaged and the 747’s approach was flown manually using visual references.

The aircraft was right of the centreline as it crossed the threshold of runway 05 – not runway 23 as investigators originally believed – after arriving on 7 September last year.

While correcting the course, says the inquiry in its preliminary findings, the captain “over-banked” the aircraft and – as its left-hand main landing-gear touched down – its outboard left-hand engine pod struck the runway 203m from the threshold.

It scraped along the runway for 44m, causing abrasion to the underside nacelle cowl latches sufficient for them to release. The cowls then opened and were torn off the engine in the slipstream.

The aircraft settled on all its main landing-gear and decelerated to a halt, with damage to the engine’s lower intake, fan and reverser cowl, and a punctured fairing on the left wing. Inspectors also found damage to a runway edge light. 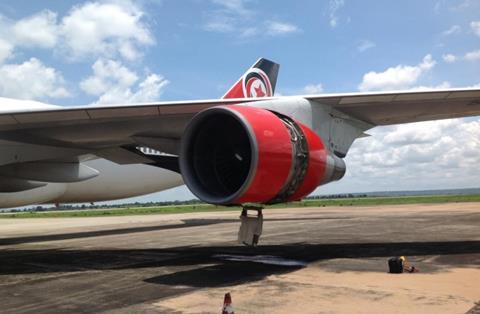 None of the 578 occupants of the 747, including 18 crew members, was injured. The Pratt & Whitney PW4000-powered aircraft (5N-DBK) had been carrying out a pilgrimage flight from Jeddah.

The inquiry notes that the first officer had mentioned to Minna controllers before reaching 20nm inbound about the possibility of bird activity – evidence of bird-strike was later discovered on the 747’s radome.

After being cleared for the ILS approach to runway 05, the crew requested to deviate left and extend the downwind leg to avoid storms, before clearing the weather and establishing the jet on the localiser for runway 05.

No cockpit conversation was captured because the voice recorder was unserviceable. The inquiry has not given much more detail on the captain’s complaint of erratic ILS signals, although it says the crew reported to Minna tower that the localiser was “not well calibrated”. Investigators have put a calibration recommendation to the Nigerian Airspace Management Agency.