While US investigators disagree with the immediate impression that the recent United Airlines Boeing 777-200 engine incident was one of uncontained failure, the extent of the damage to the powerplant was nonetheless catastrophic.

Uncontained failure is defined as the inability of the engine casing to prevent high-energy rotating parts, such as turbine discs, remaining within the engine in the event of fragmentation, a situation which could cause substantial damage to other aircraft systems.

But the right-hand Pratt & Whitney PW4000 which failed on United’s flight UA328 on 20 February did technically contain the initial disintegration from fractured fan blades – even though much of the external powerplant structure subsequently fell apart.

“We, by our strictest definition, do not consider this to be an uncontained engine failure,” says National Transportation Safety Board chairman Robert Sumwalt. “Because the containment ring contained the parts as they were flying out.”

But he acknowledges that the damage to the fan blades and loss of large aerostructures, including the inlet and the fan cowls, renders this somewhat academic.

“From a practical point of view…it really doesn’t matter whether or not we technically call it [contained],” he says. “It doesn’t change anything…it was still an event we don’t like to see.”

With images from the scene of the incident showing the inlet for the 112in (2.8m) fan fell into a residential area, the inquiry will be as keen to explain the departure of the aerostructures as the initial failure of the fan blades.

Analysis of the strikingly-similar destruction of a PW4000 on a United 777 sister ship in February 2018 might provide investigators with clues to the engine casing break-up.

That failure, triggered by a fan-blade fracture, occurred over water and much of the debris was not recovered. But Boeing and Pratt & Whitney carried out a detailed simulation of the way the engine casing – and particularly the inlet – reacted during containment of the blade-out event.

The inlet comprises two concentric barrels joined by two bulkheads, forward and aft, and covered by the lip skin. It is bolted to the fan casing via an attachment ring and, during a blade-out event, displacement loads are transferred between the inlet and the casing through this ring and the attachment bolts.

Investigators of the 2018 event found that the certification of the powerplant had been conducted with an inlet aft bulkhead manufactured from aluminium.

Aluminium could yield and redistribute the blade-out loads between the fan casing and inlet, without causing the inlet-casing interface, or the inlet itself, to fail.

But the production bulkhead was constructed instead with carbonfibre-reinforced polymer. The analysis found that the carbonfibre design was “less capable” than the aluminium bulkhead tested during certification.

Simulation of the forces unleashed during the blade-out in 2018 revealed there was a “critical threshold” beyond which the displacement wave would cause the carbonfibre bulkhead to fail. The analysis determined a displacement of 0.55in, delamination of the bulkhead structure, and failure of the inlet-casing interface – while a 0.47in displacement for the aluminium bulkhead would have enabled the interface to remain intact. 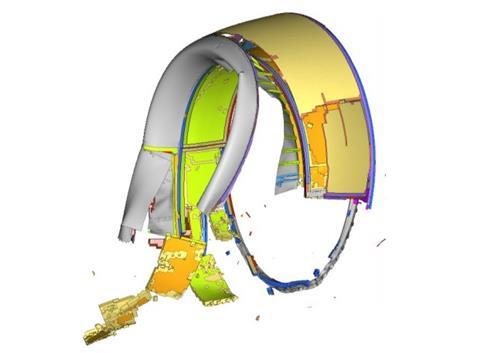 Simulation of the inlet failure on flight UA1175 in February 2018

Investigators put forward a plausible scenario in which the “unanticipated” magnitude of this displacement following the blade-out – combined with damage to the inner inlet barrel – led to the break-up. As the fractured blade struck the casing, the displacement wave caused structural damage to the aft bulkhead spanning 170° of arc across the lower half of the engine, within 25ms of the blade impact, leading the inlet sections to separate in less than 1s.

With the loss of substantial parts of the inlet, including the lower aft bulkhead, the forward section of the fan cowls would not have been able to remain engaged. Imbalance loads from the damaged engine and buffeting from the airflow, owing to the absence of streamlining from the inlet, would probably have destabilised the cowl structure.

“Large panel deflections could have induced internal stresses that were in excess of those observed during certification and exceeded the capability of the fan cowl panels and latches,” says the inquiry, with the result that much of the cowl structure detached, within 2s of the blade-out, and was lost.

Investigators also noted that “multiple” other cowls on Boeing 777s had revealed evidence of moisture ingress, sometimes in the regions of the upper cowl hinges and lower latches, which might have led to degradation and weakening and possibly contributed to their separation.

Although the inquiry into the failure involving UA328 indicates fatigue in the failed blades, spurring an airworthiness directive for the PW4000, no conclusions have yet been reached on the mechanism behind the other structural damage to the powerplant.