French investigators probing the control instability experienced by an Air France Boeing 777-300ER on final approach to Paris Charles de Gaulle have found no inconsistency between the pilots’ control inputs and the movement of the aircraft.

The aircraft, arriving from New York JFK on 5 April, had been conducting an ILS approach to runway 26L and was cleared to land.

French investigation authority BEA states that the autopilot was disengaged at 1,670ft altitude – about 1,350ft above the threshold.

Meteorological conditions show the cloud base was low, at only 300ft, and visibility was reduced by mist.

For some 45s the first officer flew the aircraft manually, making inputs to the control column and the aircraft followed them, its left and right roll not exceeding 3°.

But he then “expressed his astonishment” about the aircraft’s bank angle, says BEA, and amplified his roll inputs, with the average position of the control wheel set at 6° to the left.

BEA has not elaborated on this curiosity or the meaning of the first officer’s sudden remarks, and whether – in the conditions of cloud and low visibility – a sensory illusion played any role. 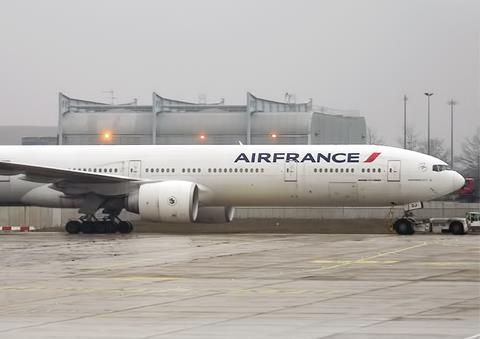 The aircraft started banking to the left, at a shallow angle, and the captain “voiced surprise” at the deviation from the approach path.

Six seconds after the first officer’s expression, the crew initiated a go-around at 1,115ft, with the aircraft banked 7° left and its control wheel 16° left.

BEA points out that the aircraft’s flightpath had “remained within” the airline’s stabilisation criteria, right up to the point when the go-around commenced.

“No failure warning was activated during the occurrence,” it adds. “No anomaly was observed on the aircraft.”

BEA found the captain, who mentioned that the aircraft was turning left, and first officer applied dual input during the go-around.

It says the captain held the column slightly nose-down while the first officer made several “more pronounced” nose-up inputs, and for 14s the columns became desynchronised – a situation which occurs if opposing forces from the two pilots exceeds a threshold of around 50lb (220N). The control wheels also briefly desynchronised twice during the event. 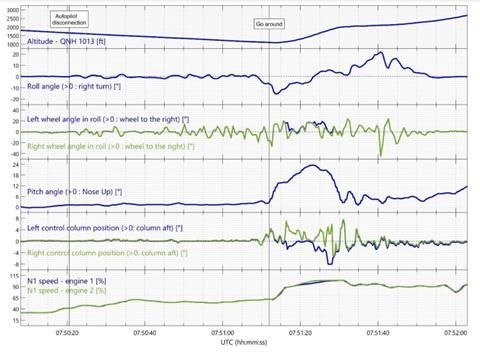 The go-around switches were pressed to increase thrust to maximum and the aircraft’s pitch rose to 24° nose-up. With positive climb established, the first officer retracted the landing-gear – triggering a configuration warning as a result of the flaps having been set for landing.

“The two pilots continued simultaneously to make inputs on the controls,” says BEA, before the captain became the sole source of commands and the crew completed go-around acions.

BEA says the crew analysed the situation “without perceiving” the antagonistic inputs made on the controls and the desynchronisation of the control channels. They considered that they could re-engage the autopilot and conduct a second approach.

After the captain informed air traffic control that the crew had experienced a flight-control problem, the first officer flew an uneventful approach to runway 27R and landed without further incident. None of the 177 passengers and 15 crew members was injured.

BEA says initial analysis of the parameters has not revealed any inconsistencies between the movements of the controls and the response of the aircraft, but validation of this work is continuing.

“Particular attention will be given to reproducing the forces applied to the controls and to the relationship between these forces and the movements of the controls,” it adds.