Investigators have determined that a Bombardier Q400 crew engaged reverse thrust while airborne after failing to settle the aircraft on the runway during an unstable approach to Yangon.

It had been inbound from Dhaka’s Shahjalal airport, with 28 passengers and six crew members, on 8 May last year. The crew had already abandoned one approach at 2,000ft because airport operations were suspended for 30min, owing to heavy rain and lightning.

The glideslope was out of service and only the localiser was available, so once the airport re-opened the Q400 crew commenced a non-precision approach to runway 21.

The captain told the Myanmar accident investigation bureau that rain emerged on the final approach at 1,500ft.

While the aircraft was on the centreline, he said, the aircraft was slightly higher than the normal 3° descent path, as revealed by the precision approach path indicator lamps. The first officer, who was flying, said the runway was visible, despite the rain, and claimed the aircraft landed smoothly.

But the inquiry says the aircraft’s airspeed had dropped below the target 135kt at about 450ft before increasing from about 160ft, reaching some 150kt at about 20ft.

Flight-data recorder analysis indicates both pilots, at this point, were making pitch inputs to their control columns, in opposite directions – the captain pushing nose-down and the first officer pulling nose-up.

The main landing-gear touched down intermittently – with “several” weight-on-wheels transitions – for about 5s before the aircraft’s pitch started to increase and it became airborne again, rising to a height of 44ft.

Power was reduced and the propellers were set to the beta range, essentially engaging reverse thrust while airborne.

“Activation of beta range would reduce the lift production of the wing significantly, and cause a nose down pitching moment,” says the inquiry. 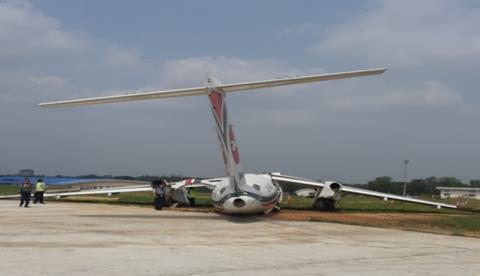 Twelve of the 34 occupants were seriously injured

The Q400’s airspeed fell and, 13s after the initial touchdown, the aircraft struck the ground and exited the runway, suffering a landing-gear collapse and breaking into three sections.

There were no fatalities but 12 of the 34 occupants were seriously injured.

Investigators state that the approach was unstable but the crew did not execute a go-around. The inquiry adds, in its recommendations, that captain should take control of the aircraft in adverse weather conditions. 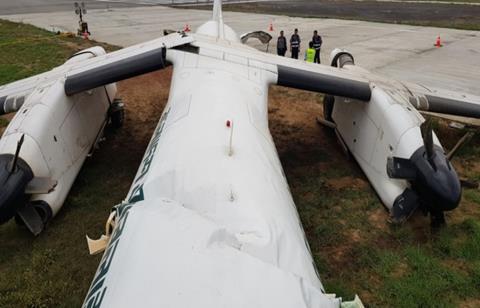