Australian investigators have determined that a Bombardier Dash 8-300 crew failed on multiple occasions to calculate correctly the fuel on board the aircraft, only realising the error after taking off for Sydney.

The QantasLink aircraft (VH-TQE) had been operating from Tamworth to Sydney on 15 January this year.

Only after the Dash 8 reached its cruise altitude did the pilots identify a mismatch in the fuel data.

The fuel on departure had been some 20% less than they believed, invalidating the take-off and flight-management system calculations, and forcing the pilots to verify they had sufficient fuel for the trip.

According to the Australian Transport Safety Bureau, the crew had been required to check or confirm the fuel on board on five separate occasions prior to departure.

“On each occasion the flightcrew either did not complete the required procedure or did so erroneously,” it states. 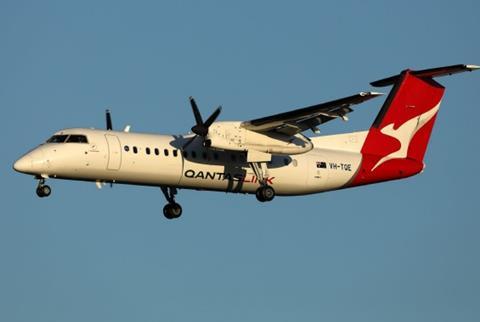 Several opportunities to verify the fuel calculation were missed

After the arrival at Tamworth, which had taken place in stormy weather, the first officer stayed in the cockpit to finalise records for the completed flight, while the captain stood by the exit door in case passengers had questions.

But the first officer, reading analogue gauges, miscalculated the fuel remaining in the tanks – coming up with 3,830lb rather than the actual figure of about 3,081lb – and did not validate the check.

The captain was presented with the record to cross-check but recalled mentally calculating the fuel to be around 3,820lb and omitted the validation.

Since the aircraft did not need refuelling, the crew entered a fuel figure of 3,830lb on the flight record for the return service to Sydney. Although the captain was supposed to physically verify the fuel quantity, the unverified mental figure of 3,820lb was used instead to program the flight-management system.

The captain used the same figure to complete the departure briefing, and also relied on memory for fuel quantity during the ‘before start’ checklist despite looking at the gauges.

Both pilots then entered the incorrect fuel figure – converted to kilogrammes – on independent loadsheets, which the cross-check did not detect.

“Had these procedures been followed properly, the incorrect fuel figure would most probably have been identified,” says the inquiry.

After revising the load calculations in cruise the pilots confirmed they had enough fuel for the flight, and the Dash 8 landed in Sydney without further incident. None of the 33 occupants was injured.