Qatar 787 drifts into A350 after being spun by Doha gale

Qatar Airways states that a Boeing 787-8 and Airbus A350-900 belonging to the carrier suffered only minor damage after the 787 was spun by strong winds and drifted into contact with the adjacent parked A350.

Surveillance video indicates the stationary 787 initially weathercocked some 90° to the left as a result of strong winds on the vertical fin before moving forwards, apparently against the wind, and making perpendicular contact with the A350’s right forward fuselage.

Doha was affected by thunderstorms during the afternoon of 30 April with winds gusting up to nearly 40kt from the south-east according to METAR data from Hamad international airport.

Qatar Airways claims the wind speed reached 70kt and, as a result, the 787 was “briefly shifted from its chocks” before the contact with the A350.

It adds that the 787 had been “parked securely” and chocked in accordance with guidelines from the aircraft maintenance manual. No-one was on board the jets and, owing to the weather conditions, operations at Hamad airport had been suspended temporarily at the time.

Images circulating on social media indicate the 787-8 involved is A7-BCT. The identity of the A350 is unconfirmed. 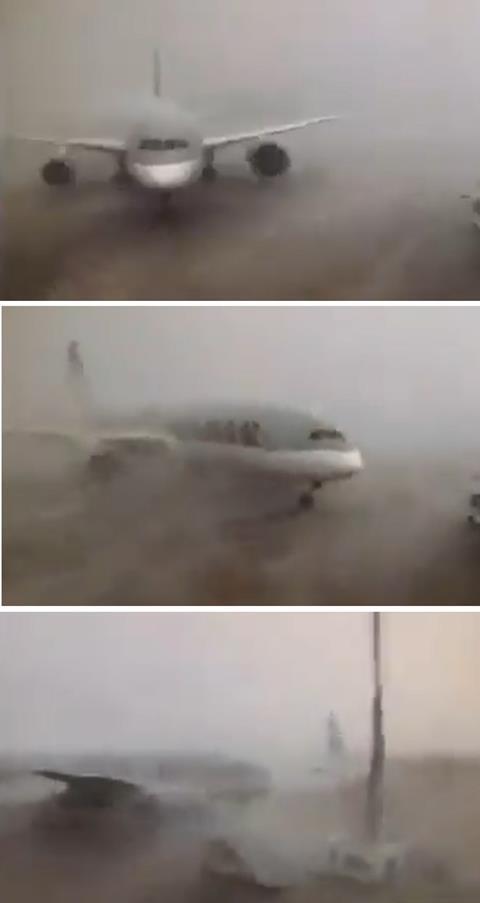 Strong winds initially appear to spin the 787 to left, before it drifts towards the A350