Iranian investigators have determined that an Airbus A350-1000’s speed declined to a low-energy state as it climbed to avoid conflict with a Boeing MD-83 that had exceeded its cleared altitude after a trim malfunction.

The Caspian Airlines MD-83 – operating from Tehran to Kish at 33,000ft – adjusted its heading at the PEKAM waypoint, bearing left onto airway UP574.

It had been dispatched with a trim motor malfunction, listed as a deferred defect, and as the aircraft turned it began to lose altitude, drifting down to 32,500ft.

According to the Iranian Civil Aviation Organisation the crew responded by manually trimming the elevator to regain its assigned altitude. But the crew overcorrected and caused the MD-83 to climb rapidly.

The Qatar Airways A350-1000 was flying along the same airway, in the opposite direction, at 34,000ft bound for Los Angeles.

As the MD-83 climbed it triggered a collision-avoidance advisory which ordered the jet to descend and the A350 to climb. The MD-83 broke through its cleared flight level to reach 33,400ft. 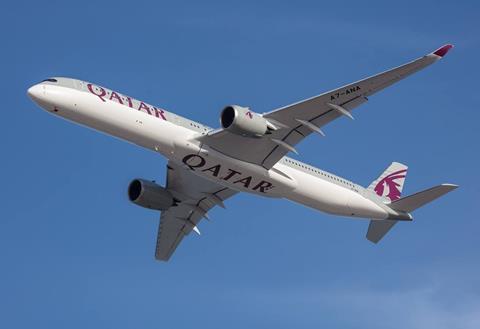 The A350’s engine thrust increased and the aircraft pitched to 7° nose-up, achieving a climb rate of 2,500ft/min, but its airspeed began to decline from M0.84.

The A350 continued to climb to around 35,400ft – above the maximum recommended altitude of 35,100ft – and its airspeed slipped to M0.792, falling below the threshold of lowest selectable speed with the autothrust engaged.

This low-energy state generated an aural ‘speed, speed’ warning which lasted for 9s.

Although the crew selected ‘open descent’ mode, which idles engine thrust and uses pitch to prioritise a target airspeed, the inquiry says this is “not in line” with recommendations, especially in a low-energy situation at high altitude.

As the A350 descended its airspeed rose and the warning stopped. It regained its prior altitude of 34,000ft and its cruise speed of M0.85.

Performance of the A350 was “not degraded at any time” during the incident, the inquiry says, but it was “limited” as a result of its 303t gross weight and high altitude, leading to the loss of speed.

Iran’s Civil Aviation Organisation published its findings on the conflict between the jets (A7-ANO and EP-CAS) on 22 August but dissemination has been hampered by persistent problems with the authority’s online presence.