Latvian authorities have confirmed that a Cessna Citation II crashed off the country’s coast after continuing to fly out-of-contact for some 2h beyond its destination.

The country’s civil aviation agency says the aircraft was originally planned to operate from Spain to Cologne but “changed its flight route” while airborne.

“Air traffic controllers were unable to communicate with the aircraft’s crew,” it adds. Unconfirmed reports in some media suggest the crew mentioned cabin pressure problems.

It came down in the Baltic Sea some 40km from the coastal city of Ventspils, after overflying Cologne and continuing for nearly 2h.

Four occupants were on board the aircraft, according to the flightplan, says the authority: “Rescuers are currently working at the scene.”

The aircraft’s identity has yet to be confirmed but appears to be the Austrian-registered OE-FGR, an example originally delivered in 1979 and operated under a US register until 2020.

Austria’s official registry lists the 43-year old aircraft as belonging to an entity called GG Rent, located in the city of Bergisch Gladbach located just to the east of Cologne. 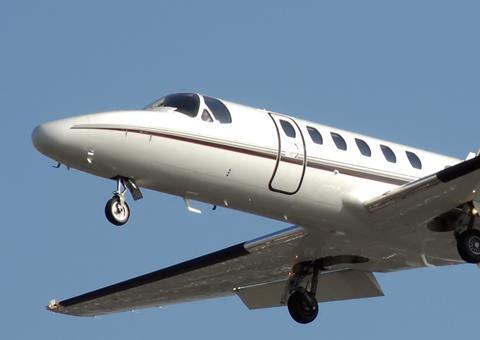 Authorities identified the aircraft as a variant of the popular Citation II, similar to this one

Unverified information from at least two flight-tracking websites indicate the aircraft departed the Spanish city of Jerez on 4 September and – over the course of 30min – climbed to 36,000ft where it remained until descending into the sea off Latvia.