Pilots of the Air India Express Boeing 737-800 which overran after landing long at Kozhikode last year were not extracted from the wreckage for an hour because rescue personnel were not familiar with the aircraft type, investigators have disclosed.

The 737 came to rest on a steep embankment after overrunning the wet table-top runway on 7 August 2020, as it arrived from Dubai in poor weather.

India’s aircraft accident investigation bureau says the fire and rescue crews at the airport had not been provided with aircraft familiarization training on the jet, despite “frequent” messages from the head of airport fire services over the previous year requesting such training.

“No action was taken by any concerned agency in this regard,” says the inquiry, adding that a civil aviation regulatory safety audit of April 2019 which assessed fire and rescue crews’ aircraft familiarisation as ‘satisfactory’ was “factually incorrect and misleading”. 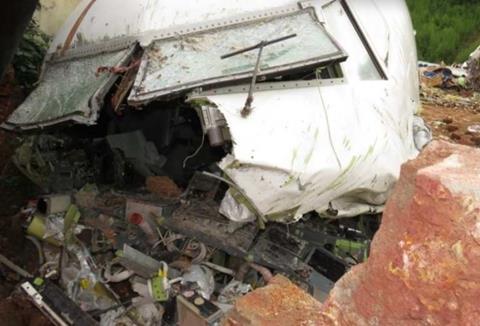 Rescuers entered the cockpit through damaged areas of the nose section

Two crash fire tenders had already been positioned at pre-determined points on the runway as a precautionary measure because of the bad weather.

Air traffic controllers saw the 737 touch down far along the runway and immediately ordered these standby vehicles to chase the jet. Three tenders reached the aircraft about 7min after the crash alarm sounded.

But the inquiry says: “It is evident from the statement of witnesses and personnel involved in the fire and rescue activity that considerable effort and time was taken to gain access to the cockpit for rescuing the pilots.”

Unfamiliarity with the aircraft type resulted in “poorly-co-ordinated” rescue operations and a “delayed” evacuation of the pilots, it adds.

The damaged nose section was close to the crash tenders but their personnel did not make any attempt to access the cockpit through a damaged left side wall, behind the forward bulkhead, a dislodged left-hand sliding window, or the damaged cockpit-entry door which was off its hinges.

Civilians and industrial security personnel instead entered the cockpit through an opening – caused by impact damage – between the windshield and instrument panel, after a section of airport perimeter wall was broken down with an earthmover.

The firefighting personnel were not present during the subsequent extraction of the pilots and were unable to offer guidance for unlocking the pilots’ quick-release rotary seat-buckle.

“After a considerable delay [the rescuers] managed to procure a knife to cut the pilot seat harness,” says the inquiry, adding that these rescuers were not familiar with cockpit layout, its emergency exits or entry door.

The pilots were finally evacuated nearly 1h after the crash, the captain being taken by a security force inspector and the first officer by a civilian.

Neither of the two pilots survived the accident although the inquiry does not attribute this to the delay in reaching and removing them.