On this day 30 years ago, a Boeing 747 operated by Pan American World Airways crashed on and around the Scottish town of Lockerbie, with tragic loss of life. As well as the 259 passengers and crew on board the 747, 11 residents of the town died as a result of the crash. Terrorism was quickly suspected as the cause.

The atrocity occurred on the evening of 21 December 1988, meaning that the news broke just too late for Flight International’s final issue of the year. Three decades ago, Flight’s news website was still some years from becoming a reality – so our first coverage of the UK’s worst-ever air crash was published in the 7 January 1989 issue. 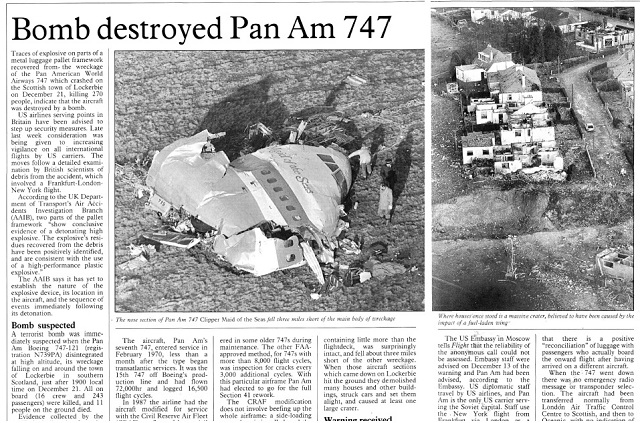 The article, headlined “Bomb destroyed Pan Am 747” (above), would have been written just before the end of the year, and reported that “traces of explosive on parts of a metal luggage pallet framework” had been recovered from the wreckage.

We reported that as a result “…US airlines serving points in Britain have been advised to step up security measures”, adding that “consideration was being given to increasing vigilance on all international flights by US carriers”.

Flight PA103 had originated in Frankfurt, with the leg to London Heathrow being operated by a Boeing 727. The London-New York John F Kennedy sector was to be operated by an 19-year-old 747-121, registration N739PA and named Clipper Maid of the Seas.

“At Heathrow, travellers bound for New York transferred, with their luggage, to the ill-fated 747, which carried the same flight number,” reported Flight. “Heathrow security regulations require that there is a positive ‘reconciliation’ of luggage with passengers who actually board the onward flight after having arrived on a different aircraft.

“Evidence collected by the UK Air Accidents Investigation Branch (AAIB), including that from the flight data recorder and cockpit voice recorder and from the wreckage trail on the ground, suggests that the explosion occurred soon after flight PA103 crossed the Scottish border and while cruising at 31,000ft. Primary radar tapes reportedly show the aircraft breaking into five sections,” wrote Flight, adding: “Major parts of the aircraft were still missing late last week.”

Flight quoted the AAIB as saying that two parts of the pallet framework "show conclusive evidence of a detonating high explosive. The explosive's residues recovered from the debris have been positively identified, and are consistent with the use of a high-performance plastic explosive.”

Significantly, Flight highlighted that investigators had found no evidence of structural failure, which “had initially been feared, given the 747's age”.

Flight provided some history about the aircraft involved: It was Pan Am’s seventh 747, and “entered service in February 1970, less than a month after the type began transatlantic services. It was the 15th 747 off Boeing's production line and had flown 72,000h and logged 16,500 flight cycles.”

It also detailed how the 747 had undergone Section 41 structural strengthening – a repair to the flightdeck "bulge" ordered by the US Federal Aviation Administration in 1986 as one method of dealing with the threat of fatigue cracks in that area.

Perhaps Flight felt inclined to scrutinise the details of N739PA’s Section 41 repair as it reported how “the front fuselage section, containing little more than the flightdeck, was surprisingly intact, and fell about three miles short of the other wreckage”. This was illustrated with an aerial image of the cockpit wreckage (below). 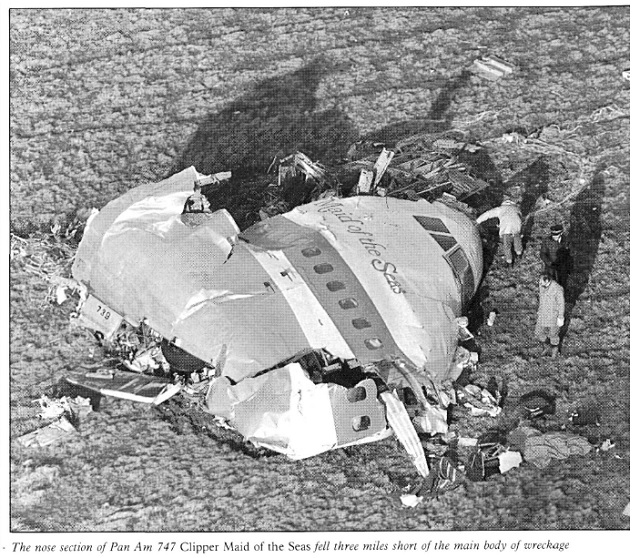 Our first report, which contained a box article detailing how suspicions of responsibility for the atrocity pointed to a Middle East faction, concluded with a poignant reminder that Pan Am had only suffered one other 747 fatal accident: “…that was in the Tenerife disaster of March 1977, in which the US carrier was exonerated of blame. The Pan Am 747 had been cleared by ATC to cross the runway in thick fog when another 747, carrying out an uncleared take-off run, ran into it at high speed, killing 583.”

Sadly, within three years of the Lockerbie tragedy, Pan Am itself had been consigned to the history books, bringing to an end arguably the world’s most famous airline, with a rich heritage that extended back to 1927.