In a year that marks so many important aviation anniversaries, the month of August has possibly the most significant of them all. For on 25 August 1919, a small British-built biplane took off from heathland close to where London Heathrow is today, beginning the first-ever daily international passenger air service.

Flight covered the historic inauguration in its 28 August edition under the rather innocuous headline “The London-Paris Air Service”, reporting that it was organised by “Messrs. Aircraft Transport and Travel, Ltd. Two Airco machines set out from this side and one machine from Paris.”

While other passenger air services had been flown before, aviation historians point to the Aircraft Transport and Travel (AT&T) operation between Hounslow Heath and Le Bourget as the true beginning of international flights, as it marked the first daily international passenger, mail and passenger service. None of the previous flights had combined all these.

AT&T was founded in October 1916 by industrialist and visionary George Holt Thomas, as a subsidiary of his Aircraft Manufacturing Company (Airco) business where Geoffrey de Havilland was chief designer. The “airliner” that operated the inaugural flight to Paris was a two-seat Airco DH4A biplane. It was powered by a single 375hp Rolls-Royce Eagle engine and flown by a single pilot, seated in an exposed cockpit ahead of the small passenger cabin. 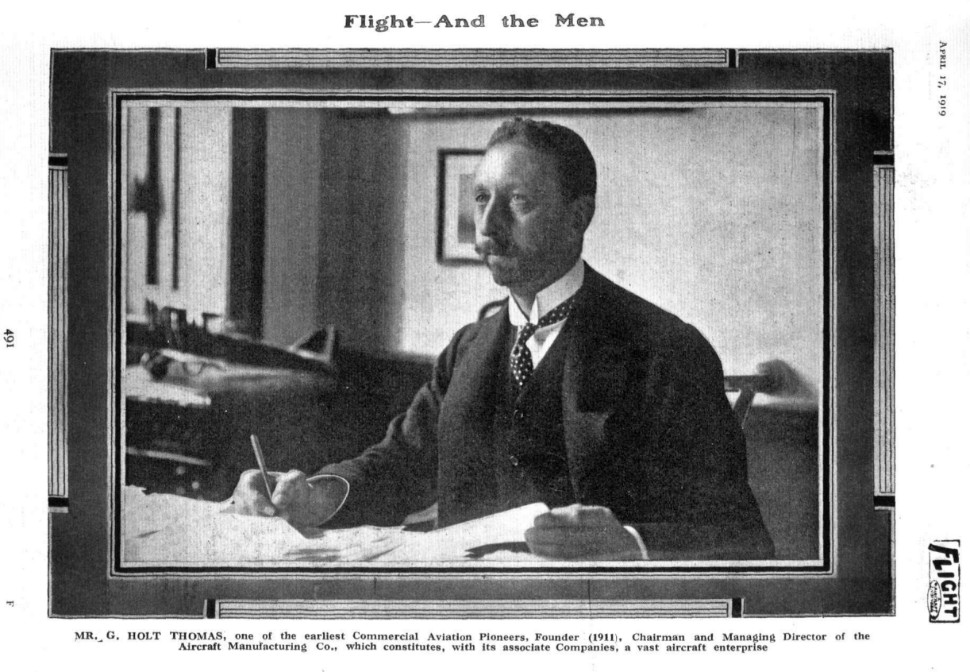 Flight reported: “An Airco 4 machine, fitted with Rolls-Royce engine, left Hounslow at 9.10 a.m. ; it was piloted by Lieut. E. H. Lawford, and carried Mr. G. M. Stevenson-Reece, of the Evening Standard, as well as a full load, including a number of daily newspapers, a consignment of leather from a London firm to a firm in Paris, several brace of grouse, and a considerable number of jars of Devonshire cream, it arrived at Le Bourget, the Paris terminus, at 11.40.”

That Monday in August, which was reported as being “grim with heavy rain”, was a busy one with several flights criss-crossing the Channel on flights between the two capitals.

“At 12.30 p.m. an Airco 16, fitted with Rolls-Royce engine, left Hounslow for the regular journey to Paris, the landing being made at 2.45 p.m. Major Cyril Patteson was the pilot, and four passengers were carried,” reported Flight. 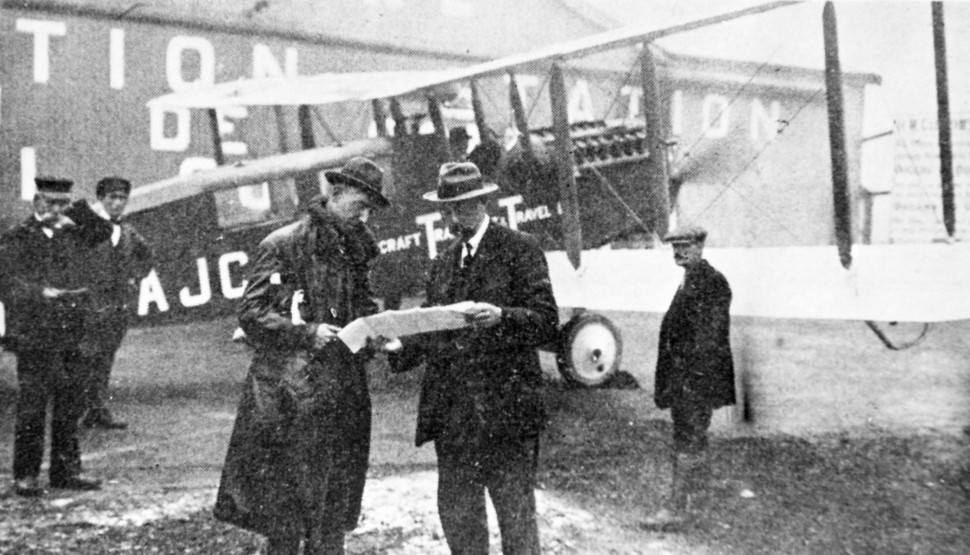 Another UK airline – Handley Page Transport – which had been created in June 1919 by the Cricklewood-based aircraft manufacturer of the same name, also flew its first London-Paris service on 25 August carrying a group of Fleet Street journalists, but regular flights did not begin until the following week. The aircraft used was the much larger Handley Page 0/7 passenger conversion of the 0/400 twin-engined biplane bomber. 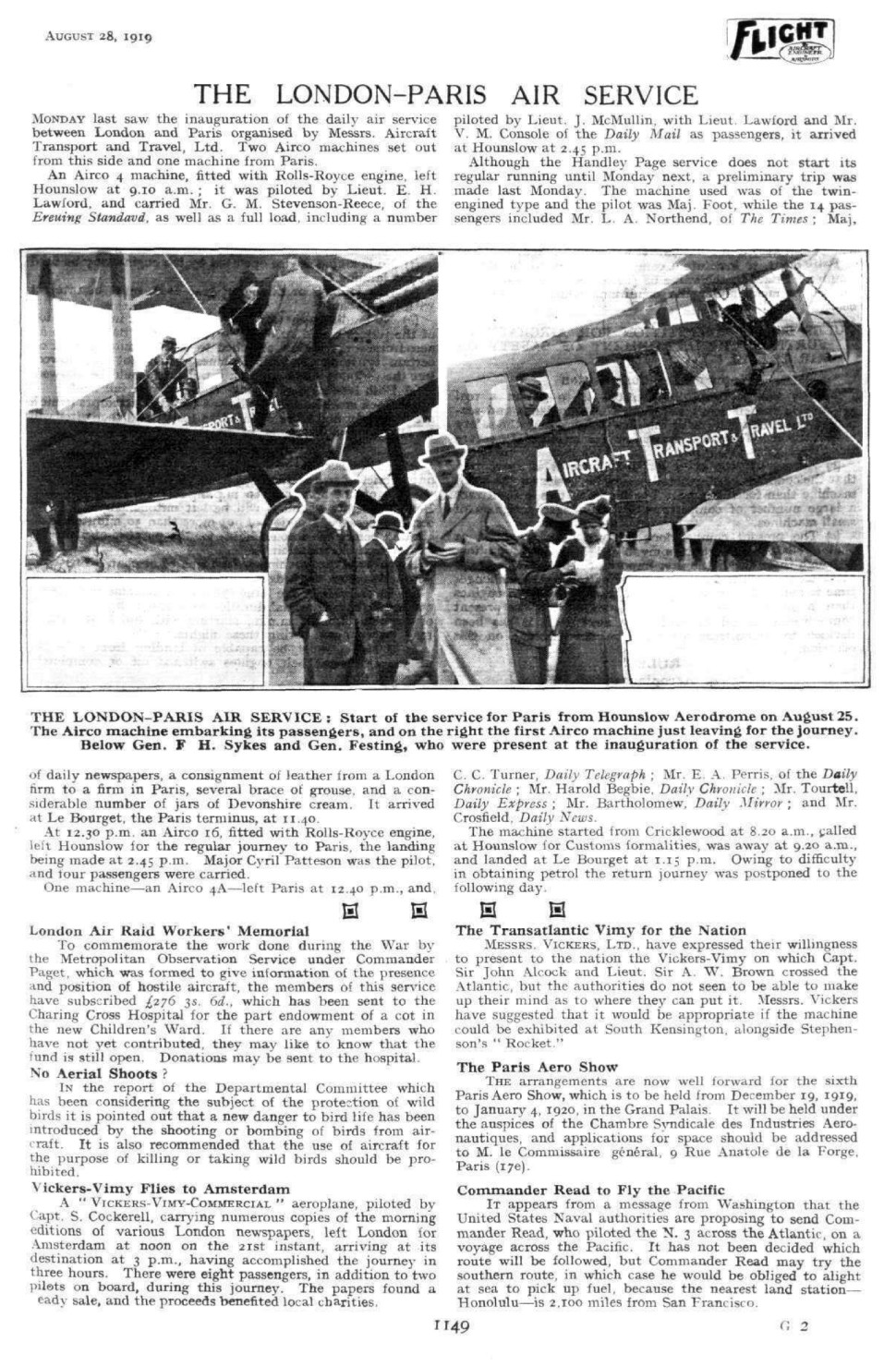 “The machine started from Cricklewood at 8.20 a.m., called at Hounslow for Customs formalities, was away at 9.20 a.m., and landed at Le Bourget at 1.15 p.m. Owing to difficulty in obtaining petrol the return journey was postponed to the following day.”

Hounslow Heath’s moment in the spotlight did not last long. Although Its customs facilities ensured it handled those early international flights, its grass runways proved less suitable for passenger operations as flying machines grew in size. So, the opening of the new London Terminal Airport in Croydon in March 1920 saw Hounslow close down – only for one of the world’s greatest international airports to eventually sprout up a few decades later down the road at “Heath Row”.

Today’s UK flag carrier British Airways points to those pioneering services in August 1919 as the origin of its creation, which means – somewhat controversially in some people’s view – the airline is marking its centenary this month. AT&T, recognised as the UK’s first airline, ceased operations in December 1920. Handley Page Transport moved from Cricklewood to Croydon in May 1921 and three years later its route network was one of the four operations that combined to create Imperial Airways. This new UK national carrier was formally launched on 1 April 1924, operating from Croydon.

Imperial continued until the late 1930s, when a further round of consolidation resulted in the creation of BOAC. On 1 April 1940, BOAC took over the operations of Imperial Airways as well as the UK’s short-haul carrier British Airways Limited, which was based not far from Hounslow at Heston airport.

As Europe emerged from war in 1946, the UK had three national airlines – BOAC, which retained routes to “the Empire, Far East and North America”, British European Airways focusing on short-haul services and British South American Airways (BSAA) serving Latin America and the Caribbean.

While BOAC and BSAA operated from London’s new airport at Heathrow, BEA initially flew from Northolt, an RAF base a few miles north. In 1949 BSAA was merged into BOAC and the ensuing golden age of air travel in the 1950s and 1960s saw the smartly-liveried fleets of BOAC and BEA help establish Heathrow as one of world’s premier international gateways.

By the early 1970s the UK government wanted to streamline the nation’s airline landscape, and on 31 March 1974 BOAC and BEA were officially dissolved as the new British Airways launched with its iconic red, white and blue colour scheme, designed by creative agency Negus & Negus.

The UK carrier launched with a fleet of some 200 aircraft according to Cirium’s Fleets Analyzer, and they were gradually adorned with Negus’s distinctive scheme featuring Union flag tails. Today, 44 years since its creation, Fleets Analyzer shows BA has a mainline fleet of 277 aircraft and carries around 45 million passengers annually.

In 1920, AT&T’s Holt Thomas expressed some farsighted views of how the airline industry might develop. At the time trains and ships dominated the continental and intercontinental travel scene respectively, but Holt Thomas was already convinced that air services between London and New York would eventually become a commercial proposition. But even he would be amazed at the extraordinary evolution the industry he helped create has undergone over the last century. One wonders what Holt Thomas might predict could be in store for the UK’s national airline over the next 100 years.

But respected aviation analyst Chris Tarry of CTAIRA says it is impossible to know.

“The reality is that it is increasingly unclear how air transport will develop even over the medium term of the next 10-30 years, given the increasing pressures for politicians to act in response to emissions and where taxation in fact does not solve the problem,” he says.

“The issue is also how to provide affordable, environmentally appropriate travel over anything more than around 200nm (400km). We are likely to see behavioural, structural and technical changes, but it’s unclear what the combined effect might be.”

Tarry says that the real issues for BA and its parent IAG are much closer at hand. “Against this background and absent acquisition, then organic growth over the near and medium term is likely to be pedestrian at best.”

In our 29 January 1920 issue, Flight reported on a speech given by Holt Thomas at the Association of British Chambers of Commerce: “Mr. Holt Thomas again took the opportunity of pointing out how the apathy of the Government towards civil aviation is destroying our lead in the air. As he pointed out, it is not charity that is wanted, but merely vision and common sense.”

Perhaps those words are as true today as they were in 1920. 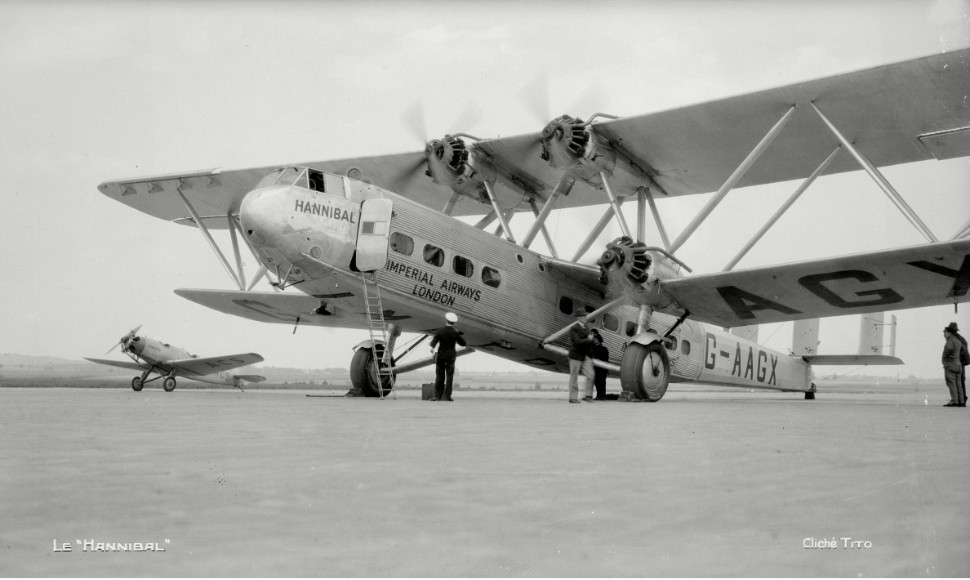 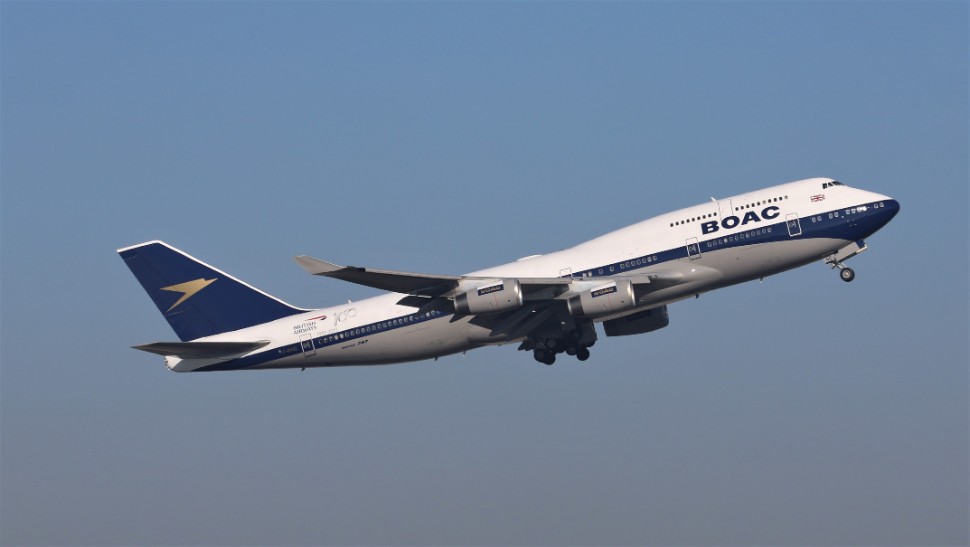 British Airways celebrates with a series of classic-liveried aircraft: 747 here and below, A320 (bottom) 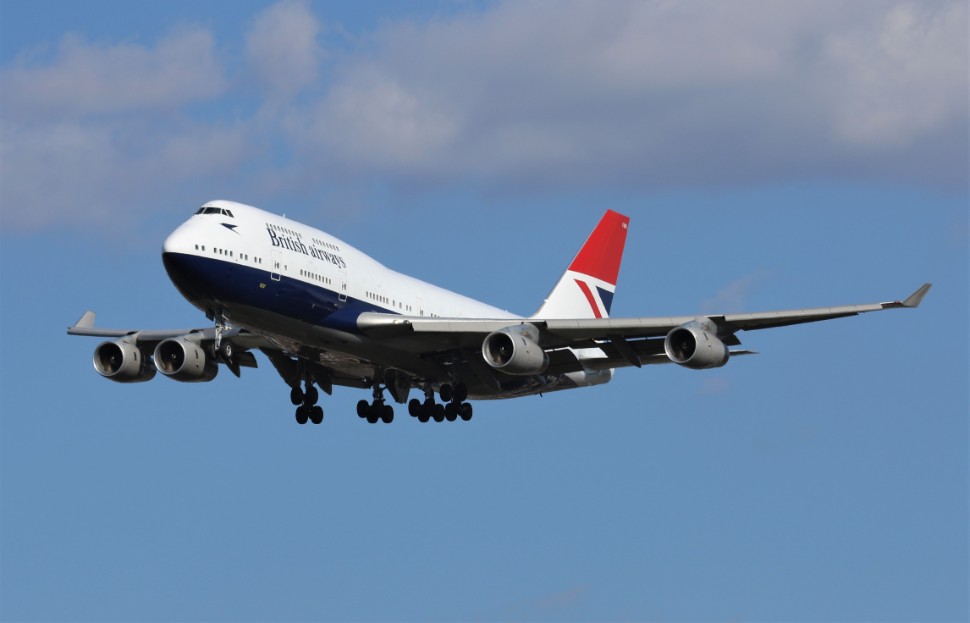 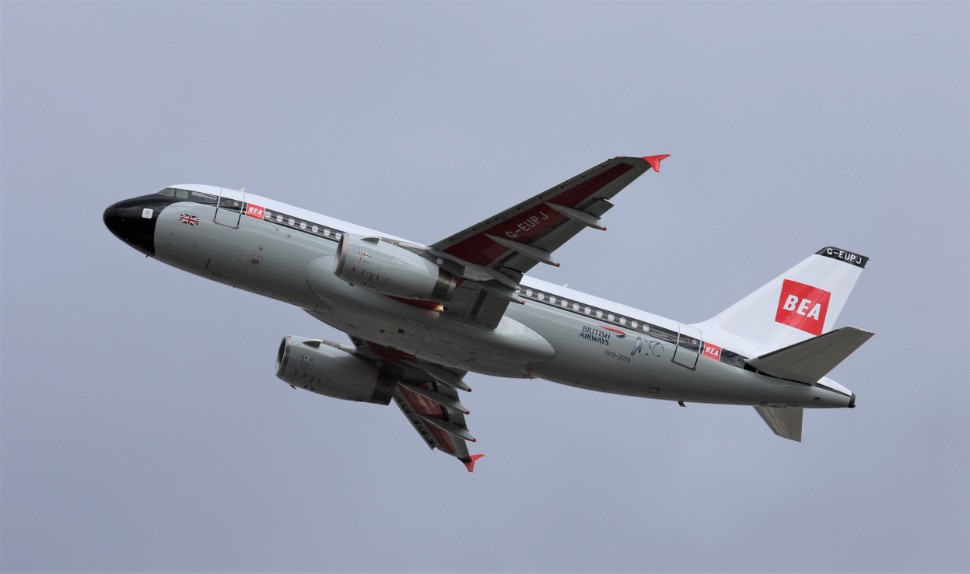