Airbus A220 operators are being instructed to update engine-control software which revises logic to prevent a dual-engine shutdown on landing.

The revision followed an incident in which an Air Baltic A220-300’s powerplants both shut down automatically as the aircraft landed in Copenhagen on 11 July 2021.

According to the US FAA the loss of engine power and hydraulic systems resulted in “compromised braking capability”.

Investigation into the event, it states, revealed that if the autothrottle increased thrust to maintain Mach number, but the pilot commanded a reduction to idle, a “transient disagreement” occurred between actual and commanded thrust.

This disagreement triggered the detection logic for thrust-control malfunction which, in turn, shut down the engines when the aircraft’s weight-on-wheels switch activated on touchdown. 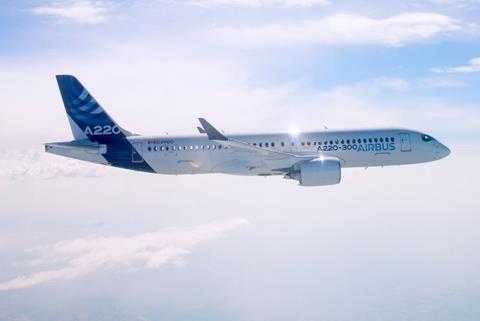 Changes to crew operating procedures were drawn up in response to the incident, directing pilots to take action before landing if an abrupt manual retardation of the thrust levers towards idle was carried out above 16,000ft.

These procedures – which include starting the auxiliary power unit and opting for the longest runway – are designed to reduce the potential for runway excursion.

The latest measures, contained in an FAA directive effective from 31 January, centre on an update to the full-authority digital engine control software for the A220’s Pratt & Whitney PW1500G powerplants.

Situations which could erroneously trigger the thrust-control malfunction logic have been identified by the manufacturer and the software has been revised to improve and correct the logic criteria. The FAA is requiring removal of certain FADEC software – the versions earlier than V2.11.14.1 – and replacement with the updated version within 12 months.