Rotor disc hits workshop after A300 engine fails on take-off

Colombian investigators are probing a serious engine failure involving an Airbus A300B4 on take-off from Bogota.

The incident occurred on 11 March, at about 00:30, as the Transcarga International Airways aircraft was departing for the Venezuelan city of Maiquetia.

Colombian civil aviation authority Aerocivil says the twinjet (YV560T) aborted its take-off after an event caused the “detachment of parts of the left engine”.

It states that the investigation has ascertained that one of the rotor discs was “ejected” during the incident, hitting a security screen and subsequently striking the door of a workshop in the vicinity.

The A300 involved is a General Electric CF6-powered aircraft, originally delivered to Eastern Air Lines in late 1983. Transcarga introduced the twinjet in 2014.

No-one on board the aircraft or elsewhere was injured, says Aerocivil. It adds that it has initiated an inquiry to determine the damage to the aircraft and the reason for the engine failure. 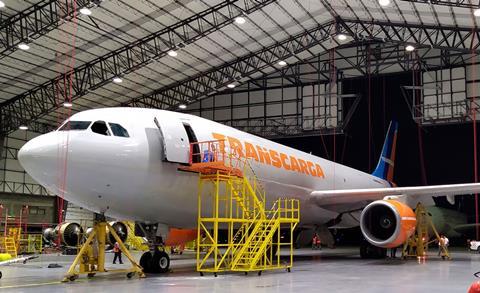