US investigators have concluded that excessive rudder-pedal input during an Airbus A321’s take-off run from New York JFK caused a sharp roll upon rotation and resulted in the left wing-tip striking the ground.

Such was the impact that the American Airlines aircraft had a permanent upward bend midway along the left wing – with the left-hand wing-tip some 15cm (6in) higher than the right – and the carrier opted to withdraw and scrap the twinjet.

The inquiry into the accident had already been focusing on the captain’s rudder use as the A321 accelerated along JFK’s runway 31L during its crosswind departure on 10 April 2019.

Investigators have determined that the aircraft was not subjected to any thrust or braking asymmetry, or nose-wheel steering inputs.

Left rudder-pedal inputs ranged from zero to 13° – consistent with the crosswind from the right – and the captain felt “everything was OK” as the jet reached 80kt, although he felt he was using more force with his left leg when applying the left rudder.

But within the 2s interval between reaching V1 at 150kt and rotation speed at 156kt, the left-rudder input increased from 8° to 25°.

The aircraft accelerated laterally and veered left of its course and, as its nose-gear lifted, the rudder was deflected about 20° to the left and the jet began to roll.

Both the captain and first officer’s sidesticks recorded maximum right-hand deflection in response – generating a ‘dual input’ alert – and the captain applied right rudder. But as the main landing-gear lifted the left roll had reached 26° and continued to increase to a maximum of 37°. 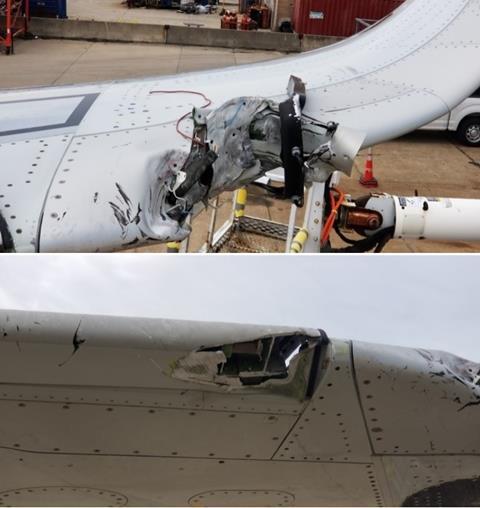 Almost immediately the cockpit-voice recorder captured a “sound consistent with a wing-strike”, says the National Transportation Safety Board.

Flight-data recorder information shows the left aileron moved without a sidestick input or a corresponding change in the right aileron, indicating it had contacted the ground. The wing had also hit a ground marker, damaging the leading edge.

The roll began to decrease as the aircraft became airborne, with the rudder pedals reaching their full-right position.

Both pilots were shocked by the aircraft’s behaviour and the crew opted to return to JFK as a precaution. None of the 102 passengers and eight crew members was injured.

Airbus simulation and analysis of the ground run and take-off showed no anomalies or abnormal response from the jet, and that it “nominally responded” to the pilots’ rudder and sidestick inputs.

American Airlines examined take-off data for over 270,000 of its A321 flights covering about a year before the JFK accident. It looked at the interval between the aircraft reaching 130kt and climbing to a height of 50ft.

Just one of these thousands of flights involved a higher maximum rudder deflection than that recorded in the JFK sequence, even though more than 2,300 flights operated with a higher crosswind component.

“The accident flight’s heading deviation was more than triple the next highest deviation,” adds the inquiry.

American also found that the JFK aircraft had experienced the longest duration of rudder application of those flights which recorded a maximum rudder input of over 50%.

“Several of the other flights experienced a larger crosswind component, with gusts as high as 43kt, yet had neither the maximum rudder deflection nor the duration of rudder application as the accident flight,” says the inquiry, concluding that the heading deviation, left roll and wing-strike were triggered by the captain’s “excessive” left-rudder input.