Swedish investigators have determined that the driver of a runway inspection vehicle averted a collision with a departing Cessna 208B at Arvidsjaur airport, after neither the pilot nor the tower controller noticed the developing conflict.

The vehicle had been cleared to enter runway 12 for inspection and bird control on 23 August last year.

After carrying out the inspection, the driver turned the vehicle around to head back along the runway, and the aircraft advancing.

He pulled over to the runway’s southern edge and the aircraft passed the vehicle at a distance of 11m.

“The Cessna pilot noticed no obstacles during the initial take-off,” says investigation authority SHK. “But when the aircraft lifted, he discovered the vehicle on his right. The air traffic controller became aware of the situation after the aircraft passed the vehicle.”

The controller, who was busy reading about new codes for reporting surface conditions, had cleared the Cessna for departure without checking the flight-progress board. 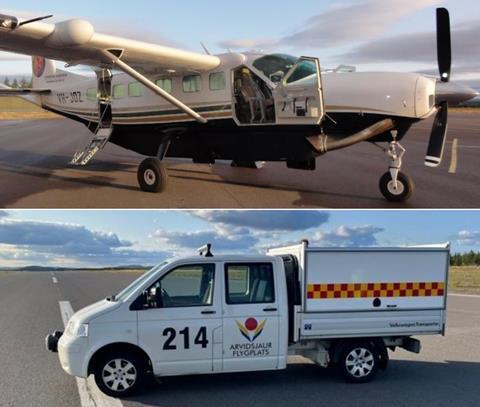 SHK says the Cessna, operated by Australia’s Thomson Airborne, and the vehicle were communicating with the controller on two different radio frequencies at the time.

It adds that situational awareness was further reduced by the “limited” intensity of the vehicle’s warning lights – even though its lights and markings all met the necessary requirements.

“Visibility was good and there were no obstacles that made it difficult for those involved to be seen from the tower,” the inquiry states. “The runway was flat and without a slope, which meant that there was no visibility barrier over the length of the runway.”

Although Arvidsjaur tower had implemented ‘sterile’ concepts, to reduce the risk of distraction, SHK says the concept “does not appear” to have been defined for air traffic control to the same level of detail as the ‘sterile cockpit’ for pilots.

It points out that the concept is not just about avoiding unnecessary administrative work during critical moments, but also postponing operational tasks that are not essential. The incident indicates an “opportunity to deepen the description” of the conditions when sterile concepts should be used.