Russian authorities have flagged the risks of ground towing, pointing out that an average of 15 incidents involving damage to aircraft occur each year in the country.

Thirteen aircraft have sustained damage over the first nine months of 2021, says air transport regulator Rosaviatsia, which is highlighting various contributors to the problem.

These include violation of procedures – including ambiguous commands – failure to clear a route of obstacles or provide sufficient margin when manoeuvring around fixtures, and driver or aircraft crew errors.

“Towing is one type of ground-handling associated with a high risk of damage to the aircraft and injury to ground personnel in case of deviation [from procedures],” says Rosaviatsia in a 14 October safety bulletin. 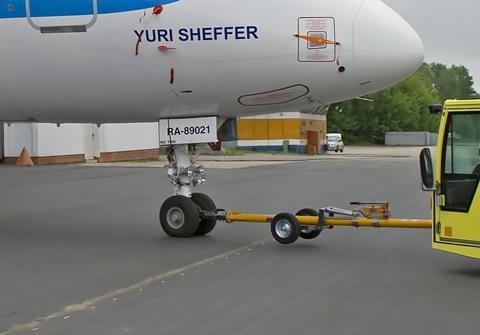 It cites several specific incidents to illustrate its concerns, including that involving a Sukhoi Superjet 100 at Chelyabinsk in November 2019. The tow-tractor driver attempted to move without waiting for a command, after the aircraft’s crew had activated the parking brake, resulting in damage to the nose-gear.

“According to the tractor driver’s explanation, he took the hand gesture of one of the towing crew as an order to start towing,” says Rosaviatsia.

At Moscow Sheremetyevo last November, a tractor driver assigned to a departing Bombardier CRJ200 assumed the aircraft could be treated as a version of an Embraer regional jet, and damaged the aircraft’s landing-gear during the attempt to connect.

The collision of an Airbus A321, under tow, with a parked Boeing 737-800 at Moscow Domodedovo in March 2020 was attributed to a supervisor’s decision to recruit mechanics servicing the 737 to act as guides for the A321.

One of the mechanics successfully instructed the towing crew to stop when the A321 threatened to strike the 737’s wing-tip, but then believed the towing process was over and returned to working on the 737 without informing the towing crew.

“The head of the towing crew, without determining the reason for the stoppage, and without assessing safety…gave the command to continue towing,” says the bulletin, adding that the A321’s elevator struck the 737’s winglet.

Rosaviatsia says incidents this year include a Boeing 747-400’s being towed on a route at Moscow’s Ramenskoye airfield which had not been sufficiently cleared of snow, leading to the outboard left-hand engine’s hitting a snow bank in February.

The head of the towing crew, it points out, was a mechanic with just two months’ experience, none of which involved towing aircraft, and the crew had fewer members than required.

“Despite the difficult conditions – darkness, heavy snowfall, lack of visibility of markings – additional towing personnel were not assigned,” adds the bulletin.

The event occurred just a few weeks after a 737-800 suffered stabiliser damage during towing to a Moscow Sheremetyevo hangar, after the hangar space had not been prepared in advance.

Owing to the presence of a Superjet 100, the towing centreline was blocked. During the manoeuvring process a member of the towing crew saw the risk of collision with a ventilation pipe but the tractor driver did not hear the command to stop.

Rosaviatsia says ground-handling providers – which are not always directly related to the aircraft operator – have a responsibility to ensure their personnel have the required skills and suitable equipment to ensure the safety of towing activities, and interact correctly with aircraft and airport operators’ management systems.