Russian investigators are probing a ground-manoeuvring accident at Volgograd which resulted in a federal customs service Mil Mi-8 helicopter colliding with a lighting mast which then fell on the aircraft.

The Mi-8 MTV (RF-38376) had been taxiing across the eastern side of the apron after landing when its main rotor blades struck the lighting mast, states the federal air transport regulator Rosaviatsia.

It spun the helicopter through a three-quarter turn, causing its tail rotor to separate and the lighting mast to fall onto the aircraft’s tail boom, crushing it.

Rosaviatsia says the five main rotor blades were destroyed, along with the tail, although the pilot and the two passengers were uninjured.

The accident also resulted in debris from the collision being flung across the apron, striking another helicopter – an Mi-8T (RA-22679) which was parked nearby. The impact punctured this helicopter’s fuel tanks and resulted in spillage of 400 litres, although there was no fire.

No-one was on board the Mi-8T which was owned by Kazan Air Enterprise and operated by Dagestan Airlines.

Russia’s federal Investigative Committee has released surveillance video images from Volgograd airport capturing the accident. The committee has initiated a routine criminal inquiry into the event. 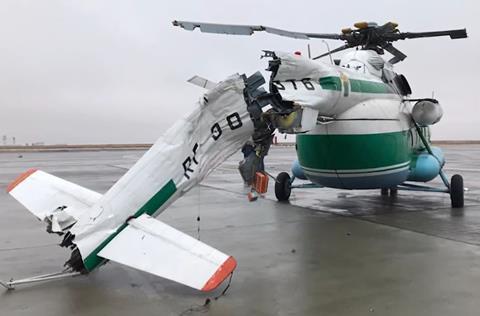