Finnish investigators have raised concerns that safety considerations are not given sufficient attention during competitive tender processes for air services.

The country’s Safety Investigation Authority has highlighted the “minor role” that safety issues play in public tendering, in its probe into a Saab 340B excursion during landing at Savonlinna in January.

It is advising that an independent European assessment mechanism be established to provide an impartial indicator of carriers’ safety levels.

Investigators found that the Latvian RAF-Avia aircraft hit a snow bank, after drifting off the centreline during touchdown, and skidded into rough ground. Although the aircraft was badly damaged, the three occupants were uninjured. 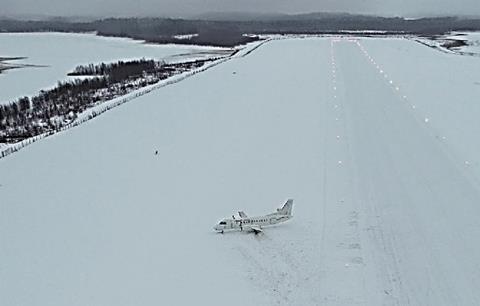 The Finnish Transport Agency opened a tender for a three-year public service contract to operate the Helsinki-Savonlinna route from January 2018.

Finnish ground-handling firm Maavoima secured the transport acquisition contract, solely based on the lowest offered price, and initially recruited Hungary’s Budapest Aircraft Service KFT for the route. But this company was replaced, for commercial reasons, with RAF-Avia in March 2018.

“No additional conditions for safe operations were stipulated in the public tender launched by the Finnish Transport Agency,” says the inquiry.

“The Finnish Transport Agency had a strong suspicion that the [European Union] would interpret any safety-related extra conditions as a restriction of competition.”

Maavoima did not have any obligation to assess the carriers’ operational safety, relying simply on their valid air operator’s certificates as evidence that they were suitably qualified. No independent queries on flight-safety records were run through either the European Union Aviation Safety Agency or ICAO.

But the inquiry points out that RAF-Avia has experienced “shortcomings” in flight safety, with incidents demonstrating weaknesses in pilot skills and crew resource management, while its safety-reporting culture has proven insufficient.

“The airline’s inadequate reporting culture originates from the time when Latvia was part of the Soviet Union,” it adds.

“In the society which preceded Latvia’s independence pilots would often avoid occurrence reporting because they could have been punished for doing so. Even though punishment is no longer a part of the airline’s procedures, it has been especially challenging to mitigate the fears of the older pilots.”

Captains average nearly 60 years of age but typically fly only 200h per year, on flights lasting 60-90min. The inquiry suggests that such low hours, and few landings, can lead to loss of proficiency.

“Operator safety was not set as a criterion in the public tender for air services because the EU’s competition rules steer purchasers to carry out the process on financial grounds,” says the Safety Investigation Authority.

It is recommending that the Finnish transport authorities “explore and instruct” ways in which safety performance can be used in tendering for air services, taking into account EU regulations.

Since there are no “universal and straightforward” indicators for assessing air carrier safety, the inquiry adds, the authority is also recommending that the European Commission works to create a process to impartially analyse operators’ safety levels.