Pressure for a Lion Air Boeing 737-800 crew to beat an airport curfew in Manado led to a misjudgement in maintaining distance separation with a an Airbus A330-300, leading to a ground collision with the widebody while taxiing at Jakarta Soekarno-Hatta International airport on 1 May 2016.

In its final report, Indonesia's National Transport Safety Committee (NTSC) found that crew of the 737 (PK-LJR) were under pressure to operate flight JT770 on the Jakarta-Manado route, having landed in Jakarta late after operating two previous sectors.

As they started taxiing at 11:54UTC, in dusk conditions, the crew observed the Lion A330 (PK-LEF), which was about to operate LNI026 to Bali, static on the apron, about to start its engines.

"During taxi near the LNI026, the LNI770 pilot deviated to the right from the taxi guideline with intention to avoid collision," says the report. "When the LNI770 aircraft position was abeam LNI026 the LNI770 pilot felt the aircraft shaking and heard unusual sound."

Meanwhile, the A330 had completed the engine start process and felt shaking. Although its engine parameters were reported to be normal, the 737 was observed "very close" to the widebody. An on ground collision was reported, with the 737 ordered to return to its gate for an inspection. 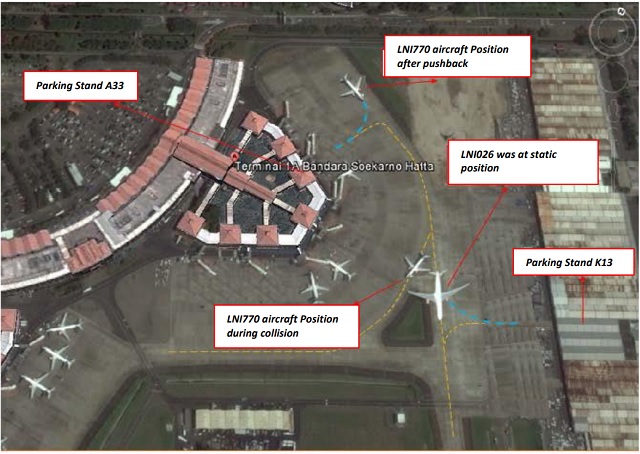 Both aircraft were damaged. The 737 lost part of its left winglet; dents were found on the lower surface of the A330's right wing.

The NTSC noted that there was no ground assistance provided to the 737 during taxiing, and that the wings of both aircraft had overlapped by 2m. This indicates a misjudgement by the 737 crew.

While the dusk lighting condition at Soekarno-Hatta airport at that time may have increased difficulty for the 737's PIC to judge the distance, NTSB believes the pressure to arrive in Manado before its operating curfew had affected the PIC's ability to "process all available information". 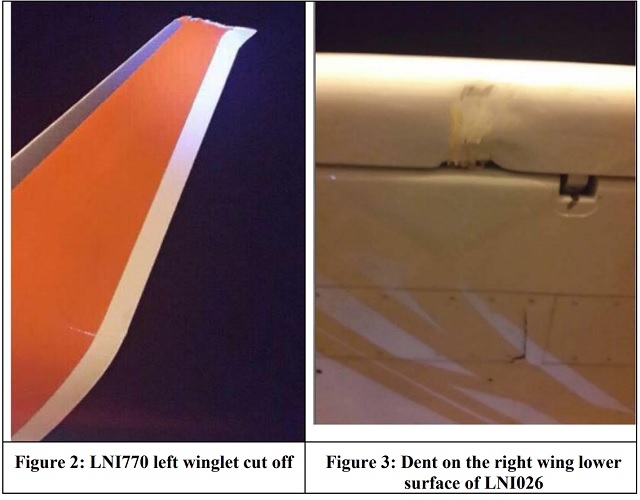 All images by Indonesia NTSC

It calls for a prohibition to aircraft from taxiing out of parking stands A11 to A43 towards taxiway SP2 via apron A, when another aircraft is being pushed back or brought to a halt between parking stands K11 and K14.

A procedure was also created for its operation control centre to anticipate such delays and airport curfews, either by assigning a new set of aircraft and crews, or to coordinate with the airport operators to extend operating hours.

Preventive measures that could lead to flight crews feeling pressure to meet schedule requirements was also part of the recommendation list.

On its end, the NTSC issued a safety recommendation for Lion Air to consider having its aircraft request ground assistance while taxiing in narrow areas, or bringing them to a halt.

Data from Flight Fleets Analyzer shows PK-LEF was built in 2015, owned by JSA Aircraft 1675 LLC and managed by Jackson Square Aviation. As for PK-LJR, the 2012-built aircraft is owned and managed by Macquarie AirFinance.