Investigators are recommending that the UK Civil Aviation Authority require that passenger seat designs minimise the possibility of portable electronic devices being crushed, after a fire incident on board a British Airways Boeing 787-9 operating to London Heathrow.

But the Air Accidents Investigation Branch acknowledges difficulties in eliminating entirely the risk of such events.

“There are currently no seat design requirements to prevent electronic devices from becoming trapped in seats,” it says.

“Manufacturers and regulators are aware of this issue but it has proven challenging to find a workable solution.”

The European Union Aviation Safety Agency and the engineering standards association SAE International have taken action to derive new design criteria and practices, but the inquiry has made a separate formal recommendation to the CAA as the UK is no longer an EASA member.

Investigators state that the seat involved in the BA incident was designed about 10 years ago.

“They were designed to limit the chance of a [device] becoming trapped, but it was found to be challenging to remove the risk completely,” the inquiry says.

“Since [the seats] were designed, [personal devices] have become smaller, batteries have become more powerful and the number of devices passengers carry has increased.”

It adds that the carrier has made “further improvements” to the seat since the original design to reduce the likelihood of an incident. 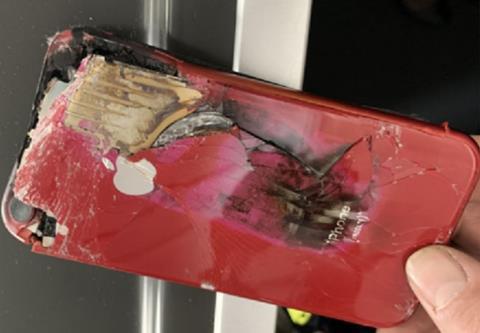 The aircraft involved (G-ZBKF) had been nearing top-of-descent, some 40min from Heathrow, following a service from Miami on 1 October last year.

After the passenger awoke and returned her flat-bed seat to an upright position, she left for the washroom, while a flight attendant stowed the bedding.

The flight attendant noticed the end of a plugged-in charging cable was tucked down the side of the seat and, shortly afterwards, heard a hissing sound and saw grey smoke emanating from the seat, as well as an “orange glow”.

Two cabin crew members, having pulled back seat padding, located a device trapped in the seat mechanism and used a BCF extinguisher on it, while a third attendant contacted the cockpit crew.

“The [cabin] crew attempted to remove the device but it was jammed. There was very little heat coming from the device,” says the inquiry. Given that the situation appeared under control, the pilots opted to continue to Heathrow but requested firefighter attendance on landing.

“One cabin crew member remained in the vicinity of the seat with an extinguisher to hand for the remainder of the flight,” says the inquiry. The aircraft landed safely and none of those on board – a light load of just 53 passengers and 10 crew members – was injured.

Investigators point out that BA’s operations manual permits use of personal devices throughout the flight, but that they must not be charged while the passenger is sleeping and must be switched off and disconnected from seat power when not in use.

The UK CAA’s mandatory occurrence database listed 166 previous reports of devices trapped in passenger seats, with 42 resulting in fire or smoke, over the past five years.

Although neither EASA, nor the US FAA, nor the CAA requires seats to be designed to prevent devices becoming trapped, the seat committee of SAE International has been asked to develop design standards. The inquiry says it expects an update to design guidance later this year.