US Senate committee investigators believe Boeing and the US FAA tried to re-affirm controversial assumptions over pilot response times during 737 Max recertification, by pre-determining the outcome of tests on crew reactions to a runaway stabiliser.

The Senate committee on commerce, science and transportation has found that Boeing “inappropriately coached” test pilots while conducting simulator tests during recertification of the Max, after two fatal accidents involving the type.

Both accidents were linked to the MCAS software system which erroneously and repeatedly trimmed the horizontal stabiliser to push the aircraft into a nose-down attitude. 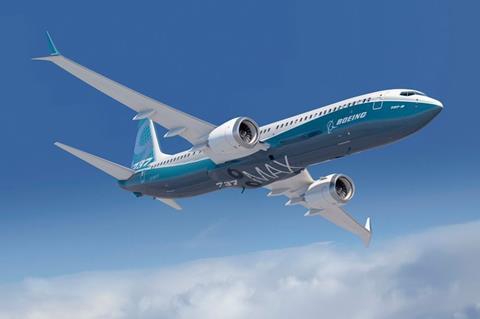 Investigators probing one of the accidents, involving a Lion Air 737 Max, stated that Boeing had incorrectly predicted the manner in which pilots would react to a series of false MCAS activations.

The Senate committee’s newly-published report states that Boeing assumes a 4s reaction time for a pilot to identify and begin correcting a runaway stabiliser, through memory.

But the committee adds that, according to a whistleblower serving as an FAA aviation safety inspector, this “long-assumed” reaction time is “not realistic”.

Boeing officials are alleged, says the committee, to have “encouraged” the test pilots to remember to activate the stabiliser trim control switches straight away, enabling them to counter actions from MCAS.

This amounted to coaching of the test pilots, the committee concludes, “contrary to testing protocol”.

Based on corroborated whistleblower information and interview testimony, it adds, Boeing and FAA officials involved in the conduct of this test “established a pre-determined outcome to reaffirm a long-held human factor assumption” relating to pilot reaction time to stabiliser runaway.

The whistleblower claims the Aircraft Evaluation Group pilot – who participated only after a second Aircraft Certification Office pilot became unavailable – took 16s to react to the runaway stabiliser, some four times longer than the 4s assumption.

Such was their concern that the whistleblower, in July last year, carried out and shared the results of an ad hoc experiment to “spot-check” some volunteer Southwest Airlines 737 crews.

This experiment was intended to explore any “potential discrepancy” between these pilots’ responses to a runaway stabiliser, through the commonly-used quick-reference card system, and the memory-item approach applied by Boeing.

While the whistleblower acknowledges the experiment – involving three crews and a 737NG, rather than a Max, simulator – was not statistically adequate, the results pointed to a lagged response time, between 7s and 11s, in recognising the stabiliser runaway. Executing the quick-reference card procedure to cut out the stabiliser trim took 49-62s.

The whistleblower also pointed out that the participating crews were experienced, and all three knew they were about to encounter an abnormal event which would require quick-reference card procedures.

“One reason line crews do not respond as Boeing expects is because they are used to the trim wheel moving by [the speed-trim system],” the whistleblower stated in an August 2019 communication detailing the results of the experiment to the Aircraft Evaluation Group.

“Differentiating [the normal speed trim movement] from a runaway trim [abnormality] does not happen in one second.”

The committee notes that the experiment, having used a 737NG simulator, did not incorporate MCAS and might have been perceived as a “less demanding” event than one induced by MCAS.

Its report, running to over 100 pages, covers a wide range of issues relating to oversight, aside from those directly involving the 737 Max situation. The FAA says it is reviewing the document.

Boeing has offered a non-combative response to the Senate findings, simply stating that it takes the conclusions “seriously” and will “continue to review the report in full”. The FAA recently granted recertification of the 737 Max.

“[We are] committed to improving aviation safety, strengthening our safety culture, and rebuilding trust with our customers, regulators, and the flying public,” says Boeing, adding that it has “learned many hard lessons” from the accidents involving the aircraft.

“[These] events and lessons learned have reshaped our company and further focused our attention on our core values of safety, quality, and integrity.”