UK investigators have attributed to bearing failure the detachment of a main landing-gear wheel from a TUI Airways Boeing 737-800 after touchdown at Manchester last year.

But the inquiry has been unable to determine the root cause of the failure. It could not rule out a pre-existing fault or the possibility that moisture or debris had damaged the bearing.

“Bearing failure investigations such as this are often inconclusive due the severity of the material damage within the bearing, destroying evidence of the initiation,” says the UK Air Accidents Investigation Branch.

The aircraft’s outboard wheel on the right-hand main landing-gear separated shortly after the jet landed on Manchester’s runway 23R, as the flight arrived from Al Massira in Morocco on 24 December.

As the aircraft slowed to 80kt the first officer handed control to the captain but, at 60kt, the pilots “became aware of an object overtaking them at high speed” on the right-hand runway edge.

Firefighters attending the scene, after the aircraft vacated the runway and came to a halt, told the crew that the wheel had completely detached. None of the 187 occupants was injured.

Following an overhaul the right-hand main wheel assembly had been installed just over a month before, on 14 November, and had accumulated 130 cycles.

“The licensed engineer who replaced the wheel reported that there was nothing abnormal about the task and that the replacement wheel was serviceable,” says the inquiry. “He was satisfied that the bearings had been correctly fitted and were properly greased.” 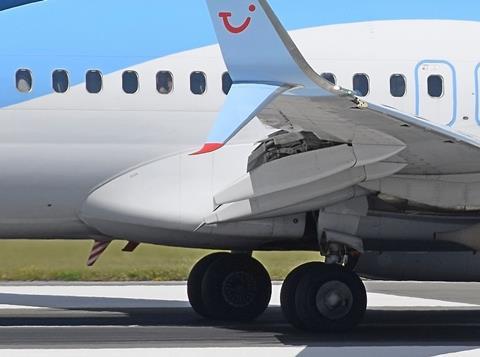 Greasing errors or debris ingress are among several possible causes of bearing damage, along with shock loading, overload, or incorrect assembly.

But the inquiry says the aircraft was not subjected to heavy landings, and there is no evidence of problems during assembly or pre-loading, even though a torque wrench was subsequently found to be out of calibration.

TUI Airways has been investigating the situation internally, because a second 737-800 in its fleet was also found, during pre-flight checks, to have suffered a similar main-wheel bearing failure, about two months after the Manchester event. But this investigation has been held up by pandemic-related restrictions.