Confusion and loss of situational awareness during a procedural approach to Bergerac resulted in a Ryanair Boeing 737-800 descending to less than 800ft above ground while still 8nm from the airport’s runway, French investigators have determined.

The crew of the aircraft – arriving from London Stansted on 29 January 2015 – had been offered a satellite-based area navigation approach, as both the ILS and DME navigation aids were unavailable.

But the crew believed they were not authorised for a satellite-based approach and opted instead for a timed NDB procedural approach.

For the southbound aircraft, this involved passing the Bergerac NDB beacon – situated to the east of runway 28 – at 2,500ft and then turning left to track eastbound for about 1min 30s, before making a left-hand 180° turn to align with the runway.

Once this alignment was performed, the aircraft would descend from 2,500ft on final approach.

French investigation authority BEA says the pilots were instructed to follow an NDB Y approach, but indicates that the crew had not expected this particular procedure, because they subsequently had to reprogram the flight-management system.

Although the first officer believed the NDB Y procedure had previously been correctly selected, the reprogramming suggests it was not, says the inquiry.

Either way, BEA says the reprogramming “did not satisfy” the captain, who chose to conduct the approach using the aircraft’s ‘heading’ and ‘vertical speed’ modes. But it notes that the aircraft was left in ‘LNAV’ mode which, it says, “appears contrary” to the captain’s decision. Cockpit-voice recorder information, which might have explained the reasoning, was unavailable. 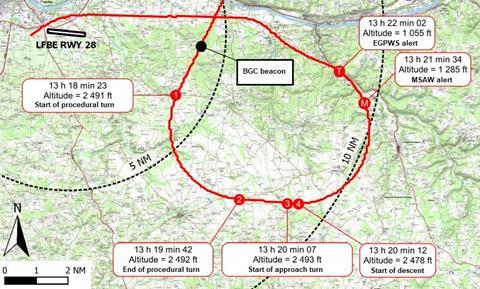 The aircraft passed the Bergerac NDB at 2,723ft on a heading of 213°, descending towards the 2,500ft selected altitude, before entering a left turn to 097°.

But the aircraft, shortly afterwards, commenced an early left turn which, says BEA, appears to correspond more to entering the holding pattern rather than the later turn for the NDB Y approach.

As it entered the turn, the captain instructed a reduction of altitude and the first officer selected an altitude of 900ft, as well as descent rate of 900ft/min and then 1,200ft/min.

BEA believes the premature descent – below the required 2,500ft – resulted from the impression that the left turn would have left the aircraft too high for the final approach.

As the aircraft descended in its continuing left turn the first officer gradually eased the descent rate back to 300ft/min.

The crew declared they were established “inbound” while still on a heading of 340°, some 65° off the final approach heading, and descending through 1,447ft.

As the flight was handed from Aquitaine approach control to Bergerac tower, a minimum safe altitude alarm alerted the approach controller. The aircraft had reached 1,240ft when the crew contacted the tower.

The crew commanded go-around thrust, as the 737 dipped below a height of 800ft above ground and the ground-proximity warning system issued a ‘pull up’ order.

Investigators state that the aircraft had been descending for nearly 2min while below the minimum altitude, adding that the crew probably had no visual references owing to the instrument meteorological conditions present.

The aircraft climbed to 4,000ft and subsequently conducted another NDB Y approach to runway 28, where it landed without further incident. None of the 172 occupants was injured.

BEA says that, although the crew believed they were prepared for the first approach, the preparation was “probably incomplete or imprecise”. The belated modification of the approach plan, including the reprogramming of the flight-management system, left the crew unable to reach a consensus on the guidance mode to be used.

“This resulted in confusion on the part of the captain as to the horizontal trajectory actually followed by the aircraft,” it adds, pointing out that the first officer was also inexperienced on the captain’s choice of approach.

Rather than opting for a holding circuit or reverting to basic procedural control, the captain requested an early descent, leading to the low-altitude approach.