Indonesian investigators believe complacency over automation, as well as confirmation bias, contributed to a Sriwijaya Air Boeing 737-500’s crew’s failing to notice a split between the throttle levers.

The split throttles generated increasingly asymmetric thrust, as the left engine reduced power while the right engine did not, causing the aircraft to enter a steep uncommanded roll and fatal descent.

Investigation authority KNKT found that the crew was conducting a right turn towards a heading of 075° for weather avoidance, and climbing through 8,100ft, when the throttle split began to develop.

While the pilot’s control wheel should have returned to a neutral position after the right turn was initiated, it remained deflected to the right as the aircraft’s autopilot attempted to maintain the turn.

This should have alerted the crew to a potential anomaly. But the inquiry says confirmation bias might have led the pilots to view the position of the control wheel, consistent with the direction of the turn, as normal.

“The confirmation bias might have also contributed to the [reduction] of active monitoring by the pilot,” says the inquiry. 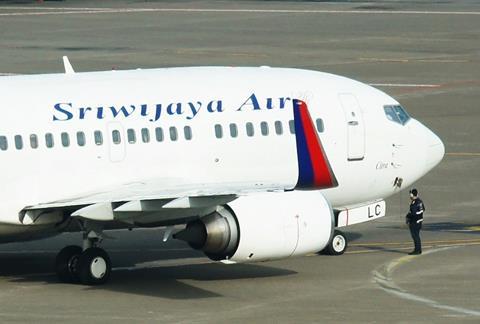 Sriwijaya Air’s 737-500 PK-CLC, the jet involved in the accident

With the autopilot and autothrottle engaged, it states, the pilots might have considered that monitoring the flightpath was “not so significant” because aircraft automation “was reliable”.

Such “automation complacency”, it adds, could have further eroded the level of flightpath and instrument supervision as the throttle levers began to split, especially since the aircraft was in a flight phase which did not require the crew to change engine power.

The split occurred when the autothrottle commanded a thrust adjustment during the climb, which should have moved both throttle levers backwards. But the right-hand lever was mechanically obstructed and remained in place, leading to asymmetric thrust as the left-hand lever increasingly wound back.

This asymmetry meant the aircraft could not maintain the right turn and it failed to reach the selected heading of 075° before it started to roll level and then to the left. 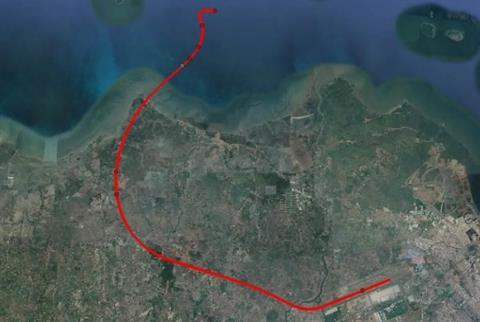 Flightpath of the 737 after departing Jakarta, showing the right turn before the jet rolled left

The inquiry says the instruments would have shown differences in the engine parameters, and the physically different positions of the throttle levers, and “should have been a cue” for the crew to identify the asymmetric condition.

Several previous incidents of throttle-lever split on the aircraft had gone unnoticed until other indications were detected, and simulations of the accident carried out by investigators in Jakarta and Las Vegas showed that pilots “did not realise” the split until they observed engine parameter changes.

The inquiry points out that the aircraft had passed 10,000ft before the roll to the left became substantial. At this altitude threshold, pilots carry out a number of standard actions, and the workload was further increased because the 737 was approaching its assigned altitude of 11,000ft.

These activities by the pilots “might have diverted [their] attention” from monitoring the aircraft’s flightpath, says the inquiry.

But it also states that between two pilot call-outs – the notification of approaching 11,000ft and the setting of standard pressure on the altimeter – there was a 17s interval during which the aircraft, as a result of the asymmetry, was rolling out of its right turn and entering a left bank.

“The investigation could not determine the pilot activity during this 17s interval,” says the inquiry. “However, this period should provide sufficient time for the pilots to revert to monitoring the flightpath.”

Weather conditions in the immediate vicinity included cloud and this might have obscured the horizon, making a visual identification of the transition from right roll to left roll more difficult.

Investigators suggest the “inadequate” monitoring of engine indicators by the crew might could have created an assumption that the aircraft was rolling excessively to the right, resulting in actions that were “contrary” to restoring the jet to a safe flight attitude.