German investigators are trying to understand why the chain for controlling a Boeing 737-400SF’s horizontal stabiliser trim was not attached to its gear mechanism, after an incident in which the crew experienced trim problems while in cruise.

Investigation authority BFU says the ASL Airlines twinjet (EI-STM) had undergone a variety of maintenance procedures about two weeks before the 7 July positioning flight from Leipzig to Cologne.

This maintenance involved dismantling parts of the cockpit, with the manual control mechanism for the horizontal stabiliser among the assemblies affected.

BFU says functional tests were planned on the aircraft’s flight-control systems following the maintenance, adding that the work and tests were stamped and signed-off as completed – without any remarks – on the corresponding work cards. 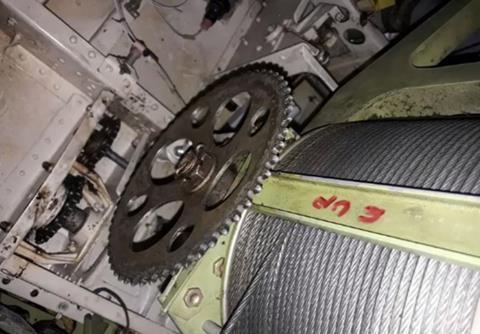 The aircraft, operated by ASL Airlines Ireland, had been positioning from Leipzig to Cologne and flying at 28,000ft when the pilots noticed the stabiliser trim was not functioning.

BFU says the crew found the autopilot was “unable to maintain stable altitude” and the aircraft was descending slightly. Its trim setting remained nose-down.

The first officer, who was flying, disengaged the autopilot and attempted to climb back to the assigned cruise altitude using the electric trim.

But the trim could not be adjusted electrically, or manually with the trim-wheel, and the crew subsequently ran a checklist and flicked the stabiliser trim cut-out switches. The flight continued to Cologne under manual control.

Cockpit-voice recordings revealed that the pilots discussed the “greater than normal” forces required on the yoke and the pilots took turns “several times” with managing the controls, says the inquiry.

The approach to Cologne’s runway 14L was further complicated when the crew discovered that the flap selector could not be moved beyond its ‘position 1’ setting.

BFU says the crew adapted to the flaps-up configuration and revised the approach speed to 158kt, and the aircraft subsequently landed without further incident.

Chain lock, found with its outer plate pushed on, and the ends of the chain

After the pilots informed maintenance personnel of the situations encountered, the aircraft’s forward equipment compartment was checked.

The inspection revealed the chain for the horizontal stabiliser trim’s manual control mechanism was “not connected” to the corresponding gears, says the inquiry.

It states that the chain, and the lock link which connects its ends, were found separately from one another in the compartment. The lock did not have any securing component attached, but neither the ends of the chain, nor the lock, showed any evidence of damage other than wear.

Both the chain and the lock have been sent for further investigation. BFU has yet to reach conclusions about the circumstances of the event.