Pilots of a Boeing 737 believe the aircraft came within 2m of a large drone during an approach to London Stansted airport in September.

The encounter has been detailed in the UK Airprox Board’s latest bulletin.

While it does not identify the carrier involved, it states that the crew testified to being on the base leg for Stansted’s runway 04 when a “white object”, believed to be a drone, “appeared and narrowly avoided hitting the aircraft” on the left side of its nose.

“The whole event happened too quickly for any avoiding action to be taken,” the board adds.

It puts the aircraft at the same height as the drone and horizontally separated by just 2m.

According to an air traffic controller at the airport the aircraft was descending through 2,800ft at the time.

The controller remarked that the crew had said they “did not know how it did not hit the aircraft”.

Information on the drone was relayed over air-ground radio frequencies to other aircraft in the approach sequence.

“There were no further sightings and the aircraft following all landed without incident,” the Airprox Board says. 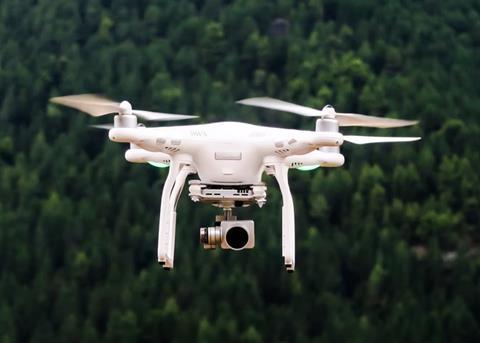 After analysing the event the board has categorised the incident as bearing a high risk of collision, and that “providence” had “played a major part”.

Another 737 crew had reported an encounter with a “large black rectangular drone” on the right-hand side of their aircraft while climbing out of Stansted four days earlier.

The event occurred as the aircraft turned onto a heading of 086° while following a standard instrument departure.

“There was a small amount of cloud cover,” says the board. “[The crew] noticed it emerge out of the cloud and then they went past it, at the same level as the aircraft.”

According to the crew the aircraft was limited to 210kt for the turn, but if the jet had accelerated, increasing the turn radius, the proximity to the drone would have been closer.

“They believed the drone deliberately occupied this particular piece of airspace as it would see, and possibly record, aircraft flying towards the drone followed by a turn and ‘fly-by’,” the board says.