Dutch investigators have concluded that a Boeing 747-400ERF crew was startled by an engine compressor stall during the take-off roll, and consequently failed to reduce thrust in time to prevent a runway excursion.

The Turkish-registered MyCargo Airlines aircraft had been operating from Maastricht, bound for Jeddah, on behalf of Saudia Cargo on 11 November 2017.

As the aircraft accelerated along runway 21 it experienced a compressor stall in the outer right-hand General Electric CF6 engine at about 30kt, causing the thrust of the powerplant to drop to around 20% of N1.

While the first officer urged the captain, who was flying, to abort the take-off, he did not mention the loss of thrust. The aircraft yawed to the right as a result of the asymmetric thrust.

“The [captain] had no information and was unaware of the cause of the deviation,” says the Dutch Safety Board. “As a result, he was surprised and he reacted intuitively.”

He used the nose-wheel steering tiller and rudder pedals, as well as differential braking, in a bid to guide the 747 back to the centreline.

But crucially, says the inquiry, the thrust levers were “not immediately retarded to idle”. The captain used his left hand to turn the tiller and took his right hand off the thrust levers to hold the control column.

Flight-data recorder information shows the thrust levers, as a result, were only retarded about 8s after the power loss. 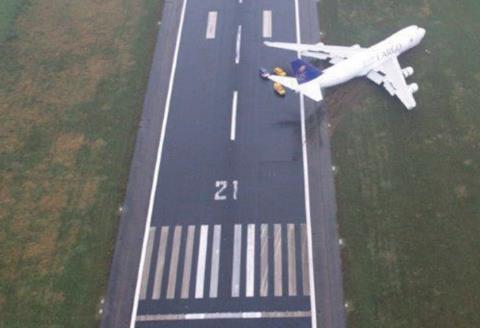 Simulations of the flight were conducted by investigators, which demonstrated that if the power of the remaining engines is maintained for just 4s, the aircraft’s tendency to yaw to the right “cannot be corrected”.

With asymmetric thrust acting on the 747 for twice this length of time, and other standard procedures not followed, controlling the jet became “impossible”, says the inquiry, and a runway excursion was “inevitable”. The jet veered off the right side of the runway and came to a halt on grass.

Investigators state that the crew appears to have experienced the “startle effect”, whereby a sudden an unexpected occurrence results in a delayed and incorrect response.

“Each year, crews are trained in rejected take-offs at low speed following an engine failure,” says the inquiry. “However, no ‘startle effects’ will occur during these training sessions as the flight crews know what to expect.”

No definite cause for the compressor stall has been determined, although the probe has ruled out foreign object damage and turbulence. “The technical state of the engine as found might have contributed to this event,” it states.

None of the four occupants of the jet (TC-ACR) was injured. But the 747 sustained substantial structural damage including deformed skin panels and stringers, and deformation to the nose-wheel well web.