Preliminary findings from the Sriwijaya Boeing 737-500 crash probe increasingly support an in-flight upset scenario in which the crew was suddenly caught out by the insidious development of an asymmetric thrust condition.

No conclusions have been drawn over the 9 January accident.

But the highly-unusual retardation of a single throttle lever to idle during a climb – with no immediate indication that the crew was aware – will intensify suspicion of an autothrottle problem, particularly given its history of a repetitive technical malfunction in the week before the accident.

Sriwijaya Air has issued an internal safety recommendation reminding pilots to maintain awareness during critical phases of flight and write detailed reports of any aircraft maintenance issues, in order to support engineers’ effort to rectify them.

It has also reminded technical personnel to “increase discipline” in regard to following aircraft maintenance processes and procedures.

The aircraft had departed Jakarta’s runway 25R on the ABASA 2D departure pattern, requiring a sharp right turn upon reaching 1,000ft to a heading of 081°. 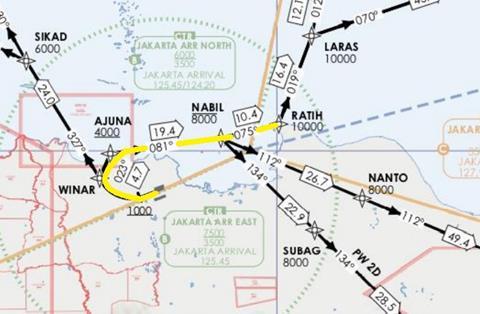 Investigation authority KNKT’s initial findings reveal that the left-hand thrust lever, for reasons yet to be determined, started to retard as the jet climbed through 8,150ft. The right-hand lever remained in position.

The crew requested a heading of 075°, citing a weather deviation. But while the aircraft subsequently started to turn right, its track suggests it never managed to complete the alignment with the heading. The inquiry has yet to clarify whether this was connected with the developing thrust asymmetry.

With the thrust imbalance the autopilot would probably have been trying to compensate for a tendency to yaw and roll left by commanding right-aileron input.

Although the crew was instructed to level off at 11,000ft, to avoid a traffic conflict, the aircraft had not even reached this altitude before it started to turn to the left, as the left-hand thrust lever continued to retreat.

At 10,900ft and a heading of 016° the autopilot disengaged and the aircraft rolled steeply to the left, with a bank of 45°, and entered a rapid descent. 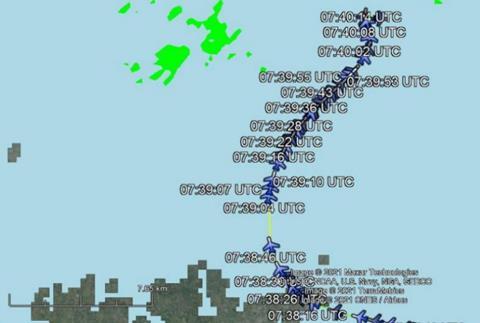 Full circumstances of the upset have still to become clear, particularly given that the cockpit-voice recorder remains unrecovered.

But the initial findings suggest parallels with a fatal China Southern Airlines 737-300 accident near Guilin in November 1992.

The aircraft had been experiencing an autothrottle problem affecting its right-hand engine and, during the descent to Guilin, the left-hand throttle lever advanced as the aircraft transitioned to level flight but the right-hand lever did not.

This led to a thrust asymmetry under which the aircraft tended to yaw and roll to the right, corrected by the autopilot with left aileron input.

But a limit to the aileron deflection meant the autopilot eventually was unable to overcome the effect of the thrust imbalance, and the aircraft started to roll slowly to the right. Control-column input suddenly cut off the autopilot’s counteraction, the jet’s right roll rapidly accelerated, and the upset resulted in the crew’s losing control.

KNKT has not provided details of the Sriwijaya 737’s airspeed, nor has it disclosed the readings from instruments including the engine indicators.

It says that it will review the history of the autothrottle maintenance, examine the pilots’ training for upset prevention and recovery, and analyse the split in the thrust levers to identify its cause.

Boeing 737-300s, -400s and -500s were the subject of an airworthiness directive in 2001 which focused on upgrading autothrottle computers following incidents of asymmetric thrust conditions in flight caused by the thrust levers’ slowly moving apart, causing the aircraft to bank excessively and enter a roll.

But the US FAA set a compliance time of 18 months for carriers to implement the change, suggesting this upgrade had taken place while the Sriwijaya aircraft – manufactured in 1994 – was still in operation with US carrier Continental Airlines.

Cirium fleets data lists the aircraft as not having left the Continental fleet until 2012, after the merger with United Airlines. It was acquired by Sriwijaya Air later that year.