Central to the probe into the fatal Aeroflot Sukhoi Superjet 100 accident at Moscow Sheremetyevo will be the speed of the emergency response and analysis of the way the fire spread to the aft fuselage.

Aeroflot is claiming that the surviving passengers evacuated the jet in 55s and that the captain was the last occupant to leave. Certification criteria require the ability for all passengers to evacuate within 90s with only half the total exits available. 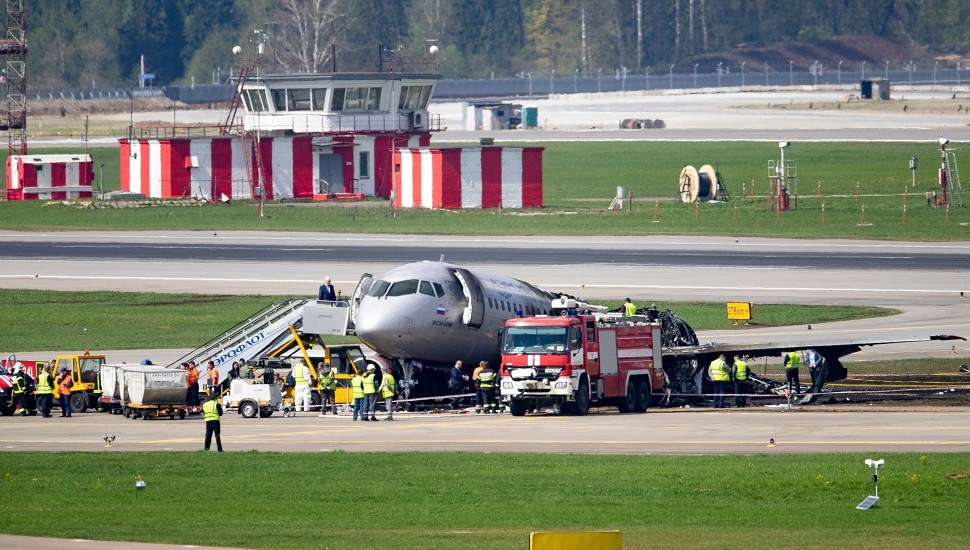 It says the crew of the aircraft, bound for Murmansk on 5 May, was “forced to request an urgent return to [Sheremetyevo]” as a result of a technical problem, the nature of which has yet to be confirmed.

The twinjet landed hard on runway 24L and continued to travel along the runway until appearing to slide and spin to the left some 90° and coming to rest at the intersection with the A2 taxiway some 2,700m along the runway.

Meteorological data points to a southerly crosswind of 13kt over runway 24L at the time, and video of the evacuation shows smoke and flames from the starboard side being blown over the aft fuselage and empennage.

Passengers evacuated through slides at least from the two forward exit doors. The inquiry has yet to confirm whether any other exits were used, and how quickly emergency crews reached the scene.

“The crew of the aircraft did everything to rescue passengers and provide urgent help to the victims,” says Aeroflot. “Unfortunately it was not possible to save everyone.”

Aeroflot has published a list of 33 passengers who survived the accident, but says this list is incomplete as the numbers have yet to be clarified.

The aircraft was transporting 73 passengers and five crew members, and the federal Investigative Committee has indicated 37 survivors – suggesting 41 fatalities.

Russia’s transport ministry states that a commission is being formed to establish the reasons for the accident.