Romanian investigators have disclosed that the pilots of a Tarom ATR 42-500 did not perform the descent checklist before a landing incident at Chisinau in which the crew lost lateral control and the aircraft swerved off the runway.

Investigation authority AIAS says the cockpit-voice recording revealed the omission, adding that examination of other serious ATR incidents involving the same operator found that performing “superficial” checklists – or even “no checklists at all” – during certain phases of flight had become “a fairly common practice” among crews.

As the aircraft touched down on Chisinau’s runway 08, following an ILS approach, the recorder captured a “moment of uncertainty” as to which pilot had control.

“Yours, yes?” the first officer asked the captain.

The first officer had been the flying pilot during the flight from Bucharest but the captain was supposed to take over during the landing roll to brake.

Investigators point out that, along with crosswind landing techniques and other approach considerations, the descent checklist includes a review on taking control of the aircraft after touchdown when the first officer is flying.

Standard procedures would involve the first officer flying the landing until the ATR decelerated to 70kt, then handing control to the captain.

But the inquiry says the failure to carry out the descent checklist meant the crew “did not establish the time and manner” of the captain’s taking over. 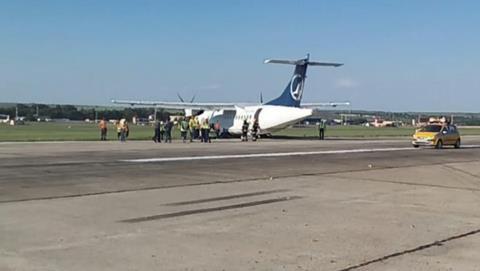 Uncertainty over control preceded the ATR’s excursion at Chisinau

On the approach the aircraft had been kept stable against a 16kt crosswind from the right.

When it touched down, the uncertainty over control resulted in “inadequate” operation of the control column and rudder pedals to maintain the runway axis.

Maximum left rudder was applied, and the aircraft began to veer to the left, before a hard right rudder input caused the ATR’s heading to swing rapidly from 75° to 110°, about 770m beyond the threshold.

The engine power was switched from ground-idle to reverse and the ATR continued for 200m, decelerating to 51kt, before exiting the runway on the right, onto grass.

Animation from the investigation showing the deviation after touchdown

Despite the aircraft’s slowing below 70kt, the captain did not operate either the brakes or the steering system.

The crew responded with opposite rudder and aileron, both hard left, and the aircraft re-entered the runway at about 1,080m, the right-hand main landing-gear striking a concrete block on which a light was mounted.

It continued travelling at about 20-30kt, with no direction authority from the flight-control surfaces. Asymmetric thrust from the engines determined the aircraft’s direction, and it crossed the runway axis before stopping on the grass off the left side about 870 from the touchdown point.

“Throughout the ground [track] of the aircraft, the crew did not use the steering system or the aircraft’s braking system, which contributed to the partial loss of aircraft control during rolling,” says the inquiry, pointing out that rudder input should be used “smoothly” to correct any deviation from the runway centreline.

“Over-corrections can cause oscillations of the aircraft’s ground trajectory, which can lead to loss of control during roll.”

Lack of a “complete and correct” briefing on landing manoeuvres was an “important element” leading to the control problems after touchdown, it adds.

None of the occupants of the aircraft (YR-ATB) was injured during the 4 June 2017 event, but the aircraft sustained damage to its three landing-gear assemblies, brakes and wheels. The light it struck during the excursion was destroyed.