French investigators have determined that two independent system failures affected the autopilot of a Royal Air Maroc Boeing 737-800 during a complex incident involving a diversion, go-around and a subsequent unstable approach to land at Lyon.

The pilots became increasingly stressed during the event, on 30 December 2016, as they progressively lost confidence in the aircraft’s systems and focused their attention on the remaining fuel level.

Investigation authority BEA states that the aircraft (CN-ROJ) had been conducting a Category III approach to Paris Orly, which required the engagement of both autopilots.

But while autopilot A was engaged, a flight control computer was not receiving data from the radio altimeter. As a result, the crew was unable to engage autopilot B, and autopilot A disengaged.

Although the crew re-engaged autopilot A, the loss of the other autopilot forced a diversion to Lyon where the weather conditions were better and permit the aircraft to land with a single functioning autopilot.

But after the 737 had intercepted the ILS localiser for a Category I approach to Lyon’s runway 35R, the aircraft unexpectedly banked 30° to the right and diverged onto a heading of 070°. 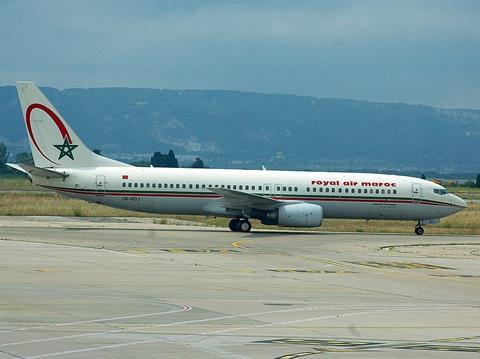 The invalid data led to the autopilot’s disengagement, and the captain had to fly the aircraft manually.

Although the crew initially attempted to restore the approach path, they realised that the deviation was too great and a go-around was necessary.

The crew engaged autopilot B but the left-hand inertial reference system fault caused this autopilot to disengage – leading to a loss of attitude data on the captain’s side, and forcing him to continue manual flight.

The captain transferred control to the first officer and autopilot B was re-engaged.

But as the aircraft captured the glideslope on its second approach to Lyon, the situation which had emerged in Paris – loss of radio-altimeter to the flight control computer – again caused autopilot B to disengage, and prompted the first officer to hand control back to the captain.

The captain proceeded with the approach manually, and without the use of flight directors.

BEA says the approach was unstable in terms of the aircraft’s flightpath, speed and configuration, and it generated several cockpit alerts from the ground-proximity warning system, including cautions over the sink rate, glideslope, and altitude.

The aircraft broke cloud cover at about 400ft and was left of the runway 35R centreline. Although the first officer called for a go-around, the captain decided a side-step to the runway for landing was preferable, in the circumstances, given the pressure of confusing system failures and two previous missed approaches.

“Both pilots, during their interviews, expressed the large amount of stress that they had felt,” says BEA, adding that the sudden deviation during the initial approach to Lyon was the “tipping point”.

“The [first officer] mentioned a very stressful occurrence with a lot of systems that were not operating [while] the captain explained that they had fought the aircraft and that they were relieved when they touched down.”

None of the 155 occupants was injured.

BEA says the situation was exacerbated by a perception that the remaining fuel was insufficient. But the inquiry states that the fuel on board permitted holding and continuing the flight “without haste”, and the weather conditions allowed a manual Category I landing.

“A gulf was therefore created between the actual status of the aircraft and the crew’s perception of it,” says BEA.

Investigators state that emergence of two independent failures in two separate systems – where the cause, absence of a link, and consequences were difficult for the crew to analyse – contributed to the serious incident.

BEA adds that “non-systematic” reporting by crews of technical malfunctions in the aircraft’s log, including inertial reference problems and automatic disconnection of autopilots, played a role in the event.

It states that such crew reports are “essential” to ensuring timely maintenance actions, and probably would have allowed the airline’s maintenance department to be better prepared to resolve issues, identify communication problems between the radio-altimeter and flight computer, and replace the faulty inertial reference unit more quickly.