Russian carrier Kamchatka Aviation Enterprise has disclosed that the captain of the Antonov An-26 which crashed at Palana had logged almost 2,900h on type including 746h in command.

He had joined the airline as a first officer in 2013, says flight operations director Sergei Gorb, flying as a captain for the past two years.

Gorb says the first officer was “relatively young” but had still accumulated nearly 1,100h on the An-26 out of 1,253h in total.

He points out that the crew members had flown together “for a long time”, resulting in a “well co-ordinated team of specialists who understood each other” and had flown the Palana route “many times”.

Recovery personnel at the coastal accident site west of Palana are facing fog, heavy seas and 35kt winds, but have located nine casualties. None of the 28 passengers and crew on the An-26 survived after it struck the top of a cliff. 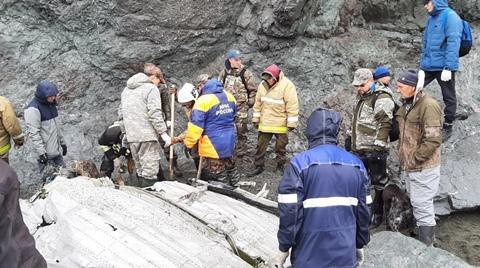 Recovery personnel pick through the accident site near Palana

Gorb says the aircraft (RA-26085) underwent a maintenance inspection a week before the 6 July accident.

He says the turboprop’s certificate of airworthiness was issued two years ago and extended to the end of 2021.

“We planned to put the aircraft in for routine check, based on flying time, in August,” he adds, stating that he believes unsatisfactory technical conditions is “very unlikely” to have been a contributor to the accident.

Gorb says the An-26 normally has a service life of up to 35 years. The aircraft involved in the crash was a 39-year old airframe but he insists the airline sends them to the manufacturing centres where they undergo “complete overhaul” with the replacement of airframe and engine components.

Russia’s federal Investigative Committee says, through its far eastern transport division, that six other aircraft were fuelled with the same fuel used for the crashed An-26, without incident.

It says the technical documentation for the aircraft’s maintenance and that for four other An-26s of Kamchatka Aviation Enterprise has been analysed, and the aircraft inspected – all of them have valid certificates of airworthiness.