UK investigators have disclosed that three aircraft landing at Birmingham airport in darkness narrowly missed a large ladder which had fallen from a maintenance vehicle in the touchdown zone of runway 33.

The A-frame ladder, about 2.2m in length, had fallen from a pick-up truck, probably during a sudden acceleration, after service personnel had conducted work on the runway’s approach lights.

Pilots of the two 737s informed air traffic controllers after landing that they had sighted something on the runway, and the 757 crew was asked whether they wanted to continue their approach.

“Given the comments of the first two aircraft it seems likely that both the controller and the crew of [the 757] did not believe the item to be of significance,” says the Air Accidents Investigation Branch.

“The overriding impression seemed to be that it was just paint or a marking on the runway.”

After opting to proceed, the 757 crew subsequently informed controllers that they had seen the object, possibly a ladder, in the touchdown zone.

“Taking the position of the ladder on the runway into account, and the main and nose landing-gear track width of all three aircraft, each narrowly missed the ladder,” says the inquiry.

Given the landing speeds of over 120kt, it adds, the ladder probably would have broken up if struck, presenting a “high risk of explosive tyre burst” and the possibility of high-energy fragment damage to vulnerable components, nose-gear collapse, or ingestion of debris by the engines. 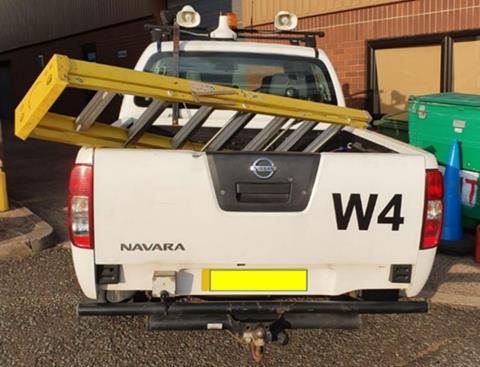 As the vehicle accelerated, the ladder loaded on its rear bay fell off

Investigators found the ladder had been secured by a bungee hook which had probably been stretched beyond its limits when the pick-up truck accelerated. After the ladder fell, it remained on the runway for 37min before being retrieved by a safety team. The incident occurred at night on 8 September last year.

“Given the grooved surface of the runway, the noise of the tyres, especially at speed, would have likely masked any sound made by the ladder as it left the truck,” says the inquiry. “Both technicians were also concentrating on checking the runway lights ahead of the vehicle and therefore their attention would not have been focused on monitoring the ladder.”