Tools left on the runway of Surabaya's Juanda International airport after maintenance work caused damage to the lower fuselage of a Wings Air ATR 72-600 as it was landing there on the morning of 11 June 2014.

In its final report on the accident, Indonesia's National Transport Safety Committee (NTSC) found that the tools — a chisel, a compressor hose, and a jackhammer — were left on a 100m section of runway 10/28.

The tolls appear to have been left following maintenance on the runway which closed the runway between 01:00 and 05:00. Although a runway readiness check was undertaken at 04:05 local time, repair work continued for 45 minutes after that, before the was completed 45 minutes later. The airport then reopened at 05:00.

The ATR 72-600, registered PK-WGK, was operating flight IW1861 from Lombok with 55 passengers and four crew on board. While landing in Juanda at 06.20 local time, the crew "heard impact noises", and reported the incident to Juanda tower. 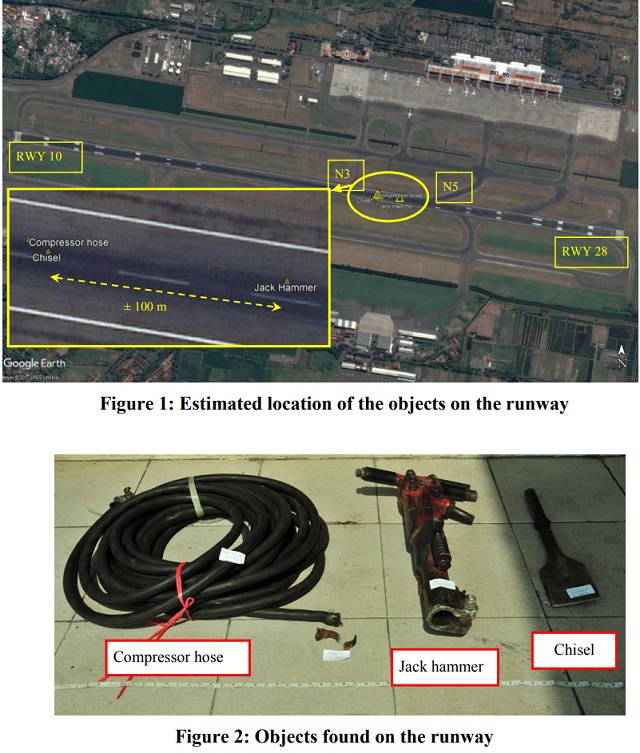 After taxiing to its bay, an inspection of the aircraft showed punctures of varying sizes on the lower fuselage, between the nose gear and the main landing gear. None of the passenger nor crew were injured in the incident.

In its investigation, the NTSC found that four aircraft - including the Wings Air turboprop - reported foreign objects on the runway between 06:09 and 06:22. The runway was only closed for an inspection at 6:23. 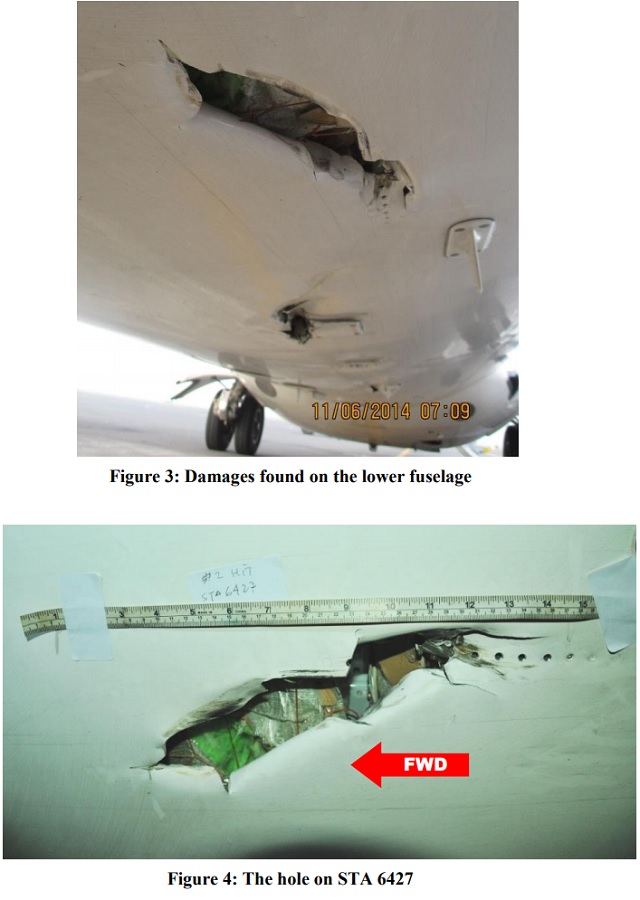 All images by Indonesia NTSC

The NTSC believes that due to a lack of information from the pilots initially reporting the foreign object presence, air traffic controllers may have considered "the consequences of the reported object to the runway operation was less severe".

It also noted that some personnel involved in the repair work were not qualified for airside work, while the person who undertook the inspection was also not trained to do so.

Juanda airport also began operations an hour earlier than its stated opening time of 06:00, and there was no notice to airmen or update to operating procedures on this.

In its safety recommendations, the investigator called on Juanda to develop procedures on hazard identification and risk assessment, and runway inspections. It also called for the operator to ensure its operating manual are kept updated.

It also called for air navigation services provider Airnav Indonesia to develop an action procedure for air traffic controllers when they receive information on the presence of foreign objects that could hinder aircraft safety.