Investigation details from the Transair Boeing 737-200 freighter ditching off Honolulu last year indicates uncertainty from the pilots over which of the aircraft’s engines had initially failed shortly after the jet took off.

Flight-data recorder information released by the National Transportation Safety Board, released in a docket on 19 December, shows a sudden drop of thrust on the right-hand engine as the aircraft climbed through 390ft.

The climb paused at 1,000ft before continuing to 2,000ft at which point the thrust on the left-hand engine reduced to idle – where it stayed for the remainder of the flight.

Thrust for the right engine also reduced further at 2,000ft but then continued to fluctuate, at low level, several times while the crew was attempting to keep the jet airborne and return to the airport.

Cockpit-voice recorder transcripts from the 2 July 2021 accident show that, a few seconds after take-off, and just after the ‘gear up’ call, the captain mentioned the loss of an engine.

The first officer, who was flying, replied “number two” – an apparent reference to the right-hand powerplant – and the captain also said, “number two”.

After levelling at 2,000ft the crew declared an emergency to air traffic control, informing that they had “lost an engine”, but did not immediately indicate which one.

According to the transcript, the captain asked the first officer to “read the gauges” to determine which “has the EGT” – the exhaust gas temperature – to which the first officer replied: “It looks like the number one.”

The captain then responded, “Number one is gone?”, and the first officer responded: “[It’s] gone, yep…so we have number two.”

“So we have number two, OK,” the captain then remarked. 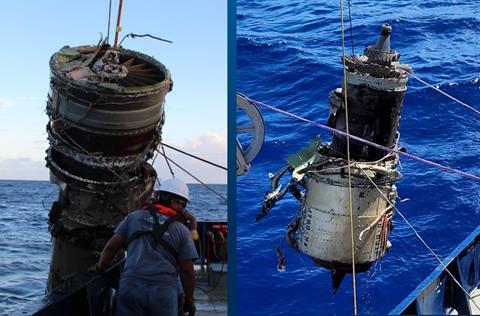 But as the crew sought to run checklists and co-ordinate the return to Honolulu airport, the aircraft’s airspeed declined and it lost altitude. The first officer appeared to mention that the right-hand engine had reached “red line” and the captain advised air traffic control that they could potentially be facing a dual engine failure.

The 737 could not maintain height and it struck the ocean surface, breaking up, but both crew members – the only occupants – survived.

In subsequent testimony to investigators, the first officer said he had heard a ‘pop’ from the vicinity of the left engine around the time the landing-gear retracted, and initially believed the left engine had failed.

But during his testimony the captain referred to the first officer’s having told him that the number one engine, the left-hand powerplant, had failed. 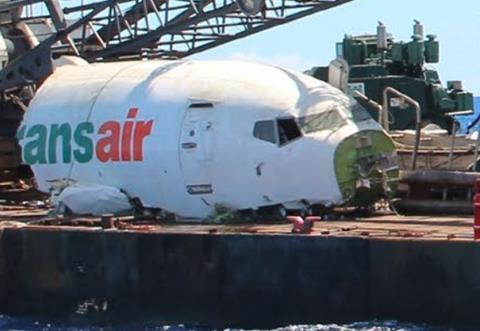 Both pilots survived after the Transair 737 ditched off Honolulu

Investigators have tried to clarify the positions of the thrust levers, whether they were symmetrical or split, and the extent to which each was moved by either pilot during the event.

Investigators queried the captain over his initial belief that the number two engine was the one that had malfunctioned, which he acknowledged, but pointed out that he believed the first officer, as the flying pilot, would know which engine had failed.

At one point during the testimony, the captain picked up on a remark from the investigator about the position of the number one thrust lever, and whether it had been moved backwards.

But the questions on the number one engine and thrust lever were sufficient for the captain to remark to the inquiry, a short time later, that he was “beginning to wonder” whether the crew “shut down the wrong engine” – although he clarified to investigators that neither engine was actually shut down.

Investigators have not reached any conclusions on the circumstances of the accident, and the reasons for the recorded losses of thrust in the 737’s engines.