Rolls-Royce analysis has determined that there is a possibility of ice build-up in the engine fuel-feed system which, if released, could constrict the flow of fuel to both powerplants, according to the US FAA.

“Sudden release of accumulated ice into the engine fuel-feed system, in combination with low fuel temperatures, could cause freezing temperatures at the inlet of certain engine fuel feed system components,” the regulator states.

It points out that there is the potential for restriction of fuel and reduction of thrust control on both engines.

The FAA has ordered a revision of 787 family flight manuals to update limitations on minimum fuel temperatures.

It specifies that, prior to take-off, tank fuel temperature must be no lower than minus 28°C and that this must be maintained during flight, even when using icing inhibitors. The tank must also be 3°C above the freezing point of the fuel in use. 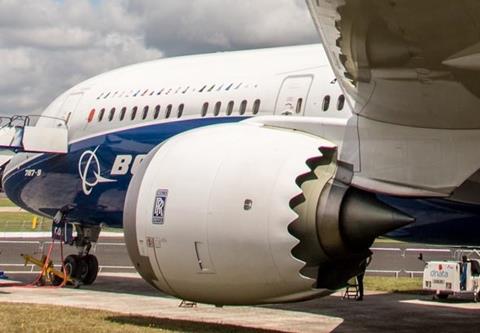 But the FAA signals that this measure is intended to be temporary because Boeing and Rolls-Royce are working to develop enhanced software to change oil temperature thresholds on cockpit engine indicators.

“This change will ensure that, before take-off, the engine oil temperature would be warm enough to operate the engine with cold fuel,” the FAA says, adding that it will consider further mandates once the software is approved.

Rolls-Royce says there is no specific timeframe on the software update, but adds that it will be keeping customers informed on progress and availability as they come on line.